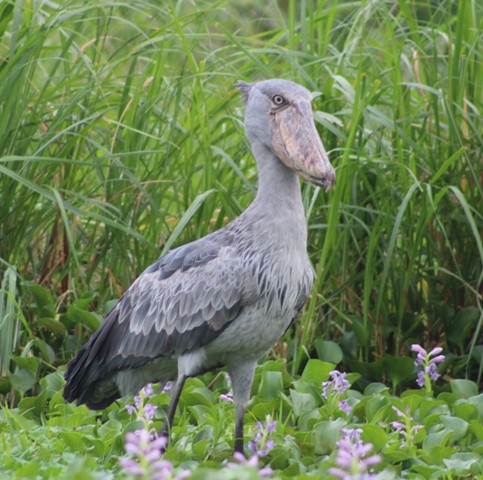 Uganda birding safaris will give you a number of birds on the massive avian list of more than 1,080 recorded bird species. Uganda is a popular birding haven for a small territory of about 233,205.1 square kilometers. Uganda has one of the largest concentrations of bird species per square kilometer in Africa. Uganda hosts 50% of Africa’s bird species and 11% of global ones. Hence, one of the top birding destinations on the continent for Africa birding tours. Its position at the Equator endows it with various ecological zones. Thus, the bio-diverse habitats host a density of bird species throughout the year. These range from highlands, rain forests, water bodies, savanna, woodland, and wetland. Birding in Uganda is often enjoyed in National Parks, forests, as well as wetlands.

Home to the endangered mountain gorillas, this is one of the most visited National Park in Uganda. Its diversity of thick forests makes the Park an incredible bird haven. In 2011, the Park acquired an award for Africa’s best birding destination. Bwindi is home to over 360 bird species among which many are endemic to the Albertine Rift valley. Out of these, about 10 are globally threatened species, and 24 are Albertine Rift endemics. 5 of the species are endangered, whereas about 76 are Guinea-Congo biome species. And 68 of the species are tropical highland biome. The Park also hosts 4 of the Lake Victoria biome species.

This Park is located in western Uganda and it is the popular primate capital of the world. Home to 13 primate species, Kibale is also a popular birding destination in Uganda. The Important Birding Area (IBA) is home to over 375 bird species. And of these, 60% of them are forest birds. Thus, making it an excellent birding spot for birders. The most sought-after bird in this Park is the Green Breasted Pitta, and it is endemic to Kibale Forest.

Attached to Kibale National Park is the Bigodi Wetland Sanctuary. This is home to more than 138 unique species. Thus, more bird species for birders who are interested in exploring Kibale. Bird species in Bigodi include; Papyrus Gonolek and Purple-breasted Sunbird. The wetland also hosts many Cuckoos, Weavers, flycatchers, Kingfishers, Woodpeckers, and Hornbills.

Semuliki National Park is located in western Uganda in the Albertine Rift Valley. The Park hosts more than 441 recorded bird species. It has grassland, rainforest, and riverine habitats, which are home to the Guinea-Congo biome species. These can be spotted on the lower slopes of the Park

Named after the great Murchison Falls, the Park is the largest National Park in Uganda. It is located in North-western Uganda. It also has the highest concentration of wildlife including four of the big five. And not only wildlife, but the Park is also a birding sanctuary with more than 450 recorded bird species. It consists of, rainforest, wetland, savannah grassland, and woodland. The best natural habitats for Albertine rift endemic, savanna, and water birds. And these are best sighted during safari game drives and on a boat cruise along the Victoria Nile.

The only home to the tree-climbing lions in Uganda and the second largest National Park in Uganda located in western Uganda. Queen Elizabeth national park is home to about 612 bird species, the Park has the highest number of recorded bird species in Uganda. Its diversity of natural habitats has made it a top birding spot in Uganda. The bird habitats range from humid rainforests, acacia, woodlands, lakes, wetlands, and grasslands. And with these, the Park is home to globally threatened endemic and near-endemic species. Birders can encounter these species during a boat cruise along the Kazinga channel and on a game drive or safari walk.

Major birding spots in the Park include the Mweya Peninsula and Kazinga channel. There is also the Ishasha Southern sector which thrives with tree-climbing lions. More spots include the Kasenyi plains, Katwe area, Maramagambo Forest, etc.

This is the smallest savannah park in Uganda and it is located in Western Uganda. Despite its small size, the Park has a diversity of wildlife and bird life. Lake Mburo is home to more than 350 bird species both native and migratory bird species. With several birding spots in the Park, birders get to encounter a variety of species. These range from forest birds to savannah birds, and waterbirds.

Kidepo valley national park is one of Africa’s finest National Parks. It encompasses open savannah grassland, woodland, montane vegetation, and palm trees. The jewel is located in North-eastern Uganda at the border with Kenya and South Sudan. Kidepo harbors over 475 bird species, 100 of which are residents of Northern Uganda and Kenya. Thus, has the second-highest concentration of recorded bird species.

Bird watching in Kidepo is best enjoyed at Apoka Camp. The spot offers spectacular birding experiences. Other spots include the edges of Narus and Namamukweny valleys.

Budongo Forest protects the largest natural rainforest in East Africa. It is Located south of Murchison Falls National Park at the border of the Albertine Rift Valley. Budongo is home to more than 700 chimpanzees, among other primate species. Thus, one of the famous chimpanzee trekking destinations in Uganda. Budongo forest is also a prime birding haven that thrives with over 360 bird species. Among these, 60 of these species are West or Central African birds. Two of the species in the forest are endemic to Budongo. That is the Puvel’s Illadopsis and the Yellow-footed Flycatcher. Budongo Forest also hosts a range of Guinea-Congo biome species.

The forests “Royal Mile” at Busingiro and Kaniyo Padidi are common bird-watching spots. A range of migratory bird species is also present in Budongo Forest from November to April.

Mabamba Bay Wetland is one of the prime birding destinations in Uganda. It is also located nearest to Kampala/Entebbe. The Ramsar site is well known for being home to the rare shoebill. This is Uganda’s most sought-after bird by most birding enthusiasts. Mabamba lies on the Northern shore of Lake Victoria, Northwest of Entebbe. It covers over 16,500 hectares of thick papyrus, wetland grassland, and water lilies. The Important Birding Area (IBA) is home to more than 260 bird species. These include resident, endemic, and globally threatened species. Key protected species in Mabamba include the Shoebill, Papyrus Gonolek, and Blue Swallow.

Bird watching in Mabamba is done on a motorized local boat. The boat ride takes you through trails in the thick papyrus in search of bird species. Mabamba Wetland can be accessed via both Kampala and Entebbe. But, the easiest route to the bay is through the Nakiwogo landing site in Entebbe. You take a 10-minute ferry from the site to the Kasanje landing site. Thereafter, drive through farmlands to Mabamba bay.

Best time for Birding in Uganda

Birding safaris in Uganda take place throughout the year. Depending on the season, the dry season is the best time for birding. This is between May to September, when there is less rain and plenty of food for the birds in the wilderness. If you are looking for migrant birds, November to April is the ideal time to visit Uganda for birding.

Also, destinations that host the Albertine Rift endemics are best visited in May and June. This is their time for nesting and breeding.