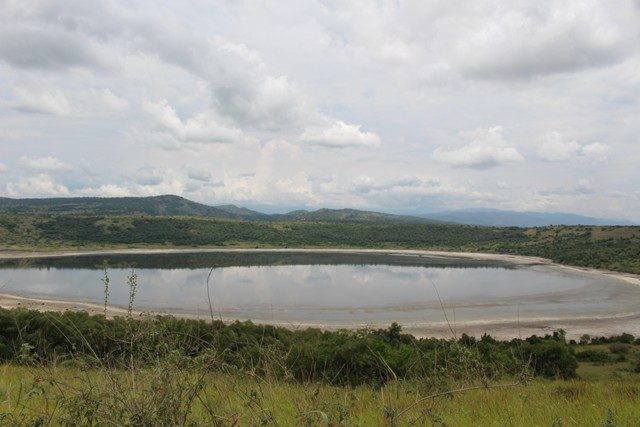 Queen Elizabeth National Park, named after Queen Elizabeth II of England after her visit in 1952, is one of the top Uganda safaris destinations. It is located in southwestern Uganda and lies astride the Equator with monuments on both sides of the road making latitude 00. It is in the Albertine region along with Kyambura and Kigezi wildlife reserve, which brings together the most diverse ecosystem in Africa. The rich bio-diversity of crater lakes, forest, savannah, woodland, and acacia and numerous animal, plant, and bird species lie on an area of 1978km2. This is the most visited park in Uganda which maybe because of its name but also is easily accessible for those traveling with public transport.

Numerous crater lakes in Queen Elizabeth give incredible scenery. Have stopovers at Nyamununka crater lake also known as the hospital for animals, many visit it to have their wounds treated or the aging animals for its waters that contain Sulphur. Take a trip to the salt mining craters, Lake Katwe or Lake Bunyampaka. Enjoy the sun set over Lake Edward and Rwenzoris in the backdrop. Ishasha sector of Queen Elizabeth national park is home to the famous tree-climbing lions that choose the branches of acacia trees after the night/early morning meals. The trees also provide the needed shed from the scotching sun which raises them to experience the winds. 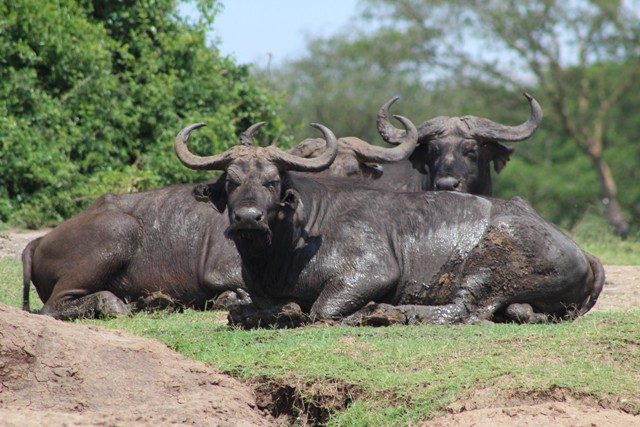 The park is home to over 95 mammal species, which are the main attraction of the visitors to the park. It has four of the ‘Big Five’ namely Elephant, Leopard, Lion and Buffalo. It is home to thousands of hippos that populate the water shores of Kazinga Channel, which connects Lake George to Lake Edward – known to have the largest herd of hippos. The park is an open Savannah spread with acacia and euphorbia trees that provide a habitat for leopards, elephants, lions, Uganda kobs, Topi, hyenas, and big herds of buffaloes, large families of banded mongoose, warthogs, bushbucks and waterbucks.

Chimpanzees and other primates are found in the adjacent Kyambura gorge and ‘underground forest’. Look for the black-and-white colobus monkeys, red-tailed monkeys, olive baboons etc. 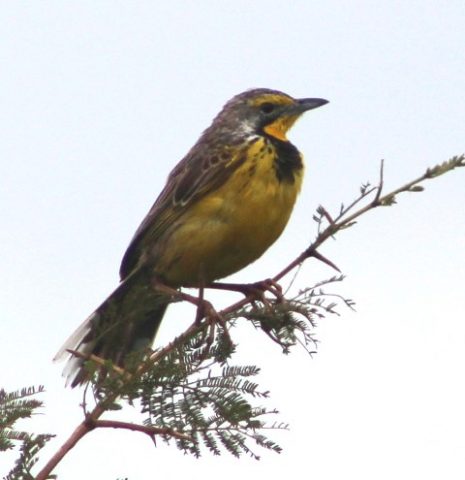 Queen Elizabeth national park is a birdwatchers haven with over 600 bird species and is an important Birding Area (IBA) according to Birding International. It has the highest number of birds found in any protected area in East Africa.

The park has diverse habitat for birds from Savannah, numerous crater lakes, forests and woodland. There are different sections where you go birding i.e. Kasenyi area, Mweya peninsula, Imaramagambo and Kazinga channel.  The bird species to look out for include, African mourning dove, Swamp flycatcher, Grey headed kingfisher, pin-tailed whydah, slender-tailed nightjar and collared pratincole. Look out for the flamingos at the salt lakes of Katwe and Bunyampaka. 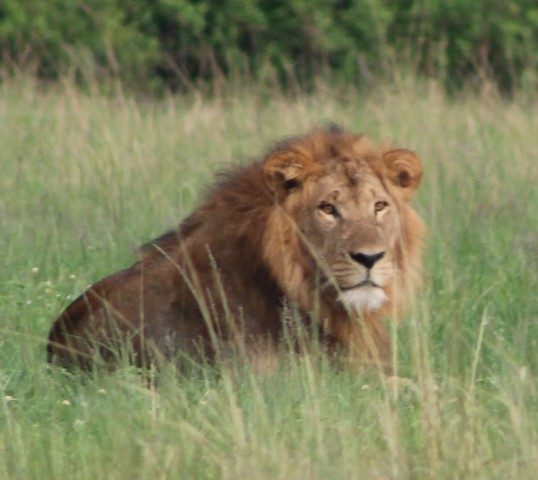 Early morning or evenings are the best times to go game viewing mainly because the sun is not as hot and the cats prefer to hunt during these periods.

The game drives in Queen Elizabeth national park happen mainly in the Kasenyi area, which has the largest Kob mating ground. The area is famous for big cats because of the high population of Uganda Kobs which they prey on. Look out for herds of buffaloes and elephants as they graze through eh Savannah. The game drives are in custom-made vehicles for safari where each occupant has access to a window seat and open roof.

Kazinga channel is a stretch of water connecting Lake Edward and Lake George provides a fantastic game and bird viewing experience. You have sightings of Elephant as they take water and schools of Hippos as they guard their territories. There are boat safaris happening from the jetty that last between 2 – 3 hours leaving both in the morning and the afternoon. There are shared boats but you can choose to hire private boats for you and your party.

Other animals you are likely to see are monitor lizards, crocodiles, waterbucks, buffaloes, Elephants, bushbucks etc. The bird life is excellent with numerous bird species. The launch trips are twice daily i.e. morning and afternoons but for birding trip we recommend the morning boat which gives you better opportunities for bird watching.

The park hosts the Kyambura gorge which is an ‘underground’ forest 100m below the Kichwaba escarpment. It is home to ten primate species including the famed chimpanzees, olive baboons, black-and-white colobus monkeys, etc. Chimpanzee tracking has to be booked in advance from the park headquarters. The chances of sighting the chimpanzees are not high but nevertheless the experience trekking through the forest is amazing as you have many other sightings of beautiful birds and other primates. 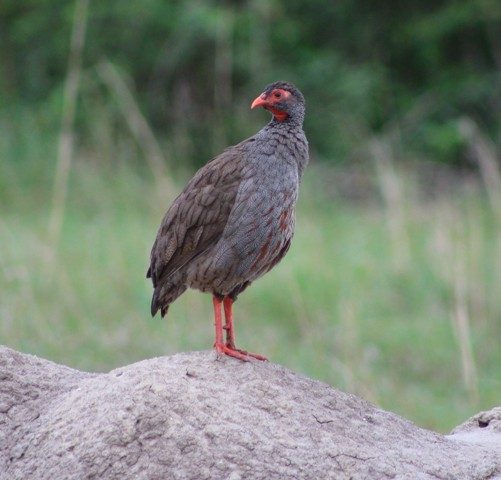 The park is great destination for birding in Uganda as it hosts 600 bird species. Lake Munyanyange adjacent to the park is a bird sanctuary as well as a migratory location for the lesser flamingo from August to November.

Other areas for birdwatching include the Kasenyi plains, launch cruise on Kazinga channel, Kyambura gorge Mweya peninsular, Maramagambo forest, Katunguru bridge and various lakes in the park. Generally, every corner of the park is a great bird watching area. The birds are relatively easy to spot and you can expect great photo shots as you explore the park and its environs.

These are done with a ranger guide for purposes of safety. They are available at the Mweya peninsular where you have a great birding and views across Kazinga channel and Lake Edward. In Ishasha, you have an opportunity to walk along Ishasha River where you have an opportunity to get close to the Hippos with your ranger guide. Maramagambo forest is another site with the famous bat cave and several bird species.

In addition to the amazing wildlife, Queen Elizabeth has a rich cultural history with a lot of fishing villages adjacent to the park. Visitors have opportunities engaging with local communities and enjoying the stories, music and dance Or engage in the daily activities of the locals like harvesting and cooking a quick vegetable meal and making crafts.

There are also communities adjacent to the park that you can visit to learn about their  initiatives and others to do community walks that allow you learn a bit more about their culture.

Kikorongo Women’s Community Project offers cultural performances of dance, drama, music and fire-making, basket weaving, paper beads. You would need to book before visiting because the women are not at this project daily but many will be in their farms where they spend most of their time.

Nyanzi’ibiri Cave Community – view of scenery around the cave. Historical cave and museum, paddle a canoe, hike to the transparent lake, spot primates and birds and a taste of local foods – from farm to plate.

Locals living in the Kichwamba escarpment, which makes up the eastern arm of the western rift valley, have an agro tourism project where they take interested visitors to their farms showing you the local farming methods. You walk through the village sighting birds, medicinal plants and learn about how they combat the human wildlife conflict as their farms border the national park.

Access Queen Elizabeth national park from Entebbe international airport using scheduled/charter flights and these land inside the park at Mweya Airstrip. Otherwise, you can drive from Kampala via Mbarara to the park OR Kampala via Fortportal to the park.