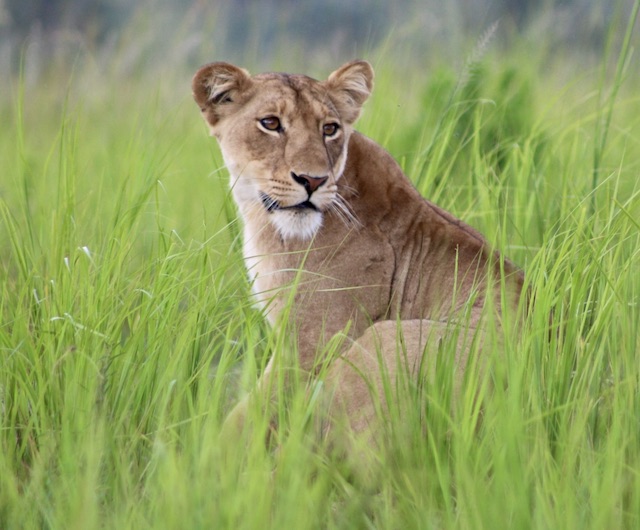 At Queen Elizabeth National Park, they have been branded the Ishasha tree climbing lions, at Murchison Falls National Park, the three-limbed lion will be a must see and in the less-explored plains of Kidepo Valley National; they thrive in abundance undisturbed. In Uganda, these three are the best parks at which to see lions. After Mountain Gorillas, lions are the next most sought after animal by tourists on a Uganda safari. In the recent past, lions were re-introduced in Akagera national park of Rwanda. Look out for them while on a safari in Akagera National park.

Here are 5 facts about lions.

Lions are the most social of the large cat family whose other members are mostly solitary. The force behind lions forming prides is the need to survive. The larger the pride, the more chances of it monopolizing prime territory. Smaller prides are pushed to the margins of the parks. Prime territory is near river where prey comes to drink water, making it easier for the lions to make a kill. A pride will consist of 10 to 15 lions headed by a male lion. The social cycle is propelled by male cubs which from the age of 2 or 3 years, set out to conquer prides of their own. In the event that the lion has no brother or cousin, it may partner with another singleton and if it doesn’t, then it is more likely to live a solitary life.

A lioness needs at least 5 kilograms of meat per day while a male lion needs 7 kilograms.  The lioness weighs about 130 kilograms and 180 kilograms for the male lion. All the hunting is done by lionesses because they are faster and lighter than a male lion. However when the prey is killed the male lion eats first and the lionesses allow this because a hungry lion cannot protect the pride. To find meat, lionesses may depend on scavenging and watching vultures to lead them to where the carcass is.

Lions sleep for up to 20 hours a day and are active for about 4 to 5 hours a day. Their day in essence, begins at dusk and ends at dawn. However, where they are in a territory with enough water supply, they can be active during the day and able to hunt during the day on rare occasions.

A lion’s most defining feature is its mane although there are maneless lions too. The mane; a tuft of fur that grows around the neck of a lion starts to develop when the lion is about 12 months. By the time it is 2 years old, the lion will have grown a mane allover its neck, head and chest region and it stops growing at the age of 3 or 4 years. Lions in captivity tend to grow larger manes than their counterparts in the wild. The darkness of the mane not only implies seniority in age among male lions but also attracts more lionesses. It also indicates crucial information about the lion’s fighting abilities and health to its pride and rivals.

The lion is at the top of the food chain implying it is not preyed in by any other animal. Inspite of this, lions’ lives are still threatened by imminent danger of habitat loss. It is because of this threat that lions were added to International Union of Conservation of Nature’s Red List of Threatened species as vulnerable. Once found all over the world in Asia, Europe and many parts of Africa, lions can now only be found in Africa.