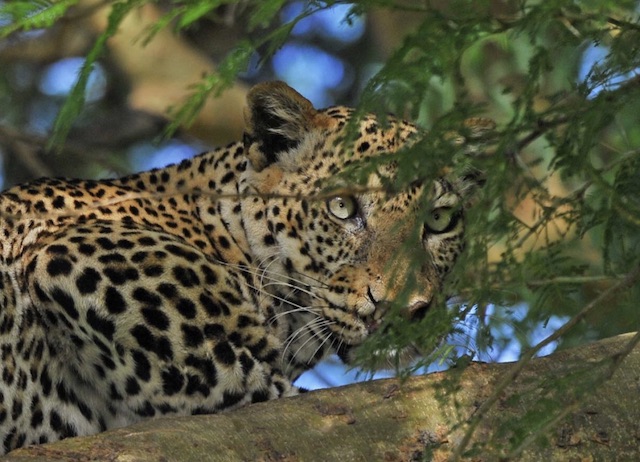 A golden spotted body and graceful yet ferocious hunting techniques paint a picture of a leopard. Its character on the other hand, can be summed up as solitary, stealthy, and elusive. Leopards are part of the vast wildlife found in Uganda. The best places to view them include Semiliki National Park and Wildlife Reserve down in the escarpment of the western Rift valley, Kidepo Valley national Park up north, Murchison Falls National Park along the famous River Nile, Queen Elizabeth National Park and Lake Mburo National Park in western Uganda. While on a safari in Uganda, on a game drive in one of these parks and you are blessed with the sight of these graceful creatures, here are five facts to remember about them.

The fact that leopards are solitary animals is typical of the cat family; the exception being lions that live socially in prides. If you come across leopards strolling in a pair, the other is a female and it is mating season. A female leopard signals her readiness to mate by the scent of her territory markers such as her urine. They will mate 70 to 100 times a day for 4, 5 or 6 days and even hunt together during this time. This will be followed by a gestation period of three months and the birth of cubs only 2 or 3 of which will have chances of surviving. After this, the male leopard may retreat back to its solitary lifestyle.

Their size could have played a role in making them the most agile climbers of all the large cats. Their habitat is mostly trees to escape midday heat and eat their prey in peace. They grow up to 92 to 190 centimeters (3 to 6.2 feet) with their tail adding about 99centimeters to their general body length. There is a variance in the weight of the male and female leopard with the male typically weighing 36 to 75 kilograms and the female; 21 to 60 kilograms. The fact that leopards are the smallest in their family has nothing to do with their strength. They can singlehandedly carry up to 50 kilograms of prey up a tree.

The diversity of their carnivorous diet has had a positive impact on their survival in the wild. They can eat almost any vertebrate from reptiles, fish, to warthogs, zebras, antelopes and the wildebeest. They however have a preference for medium sized animals like antelopes. It is from their prey that they get the water content they need to survive, making it easy for them to spend so many days without a need for water.

They stalk their target from a few meters away, waiting in ambush in case the target moves towards the leopard’s direction. Once the prey is close enough, it kills it in one swift yet ferocious move usually by grabbing the neck and breaking it. For the smaller vertebrates such as rats, a single swat of the paw is sufficient to do the job. The speed of the leopard can go up to 35miles per hour and is quite an advantage in the hunting business of a leopard. Hunting for the leopard’s offspring starts at the age of 3 to 4months and is polished over time.

They can live in any type of habitat, which explains why they are found in various parks located in different regions of Uganda. Be it a rainforest, a woodland, savanna grassland, mountains, shrub lands or swampy areas, leopards can thrive in whatever surroundings they are placed in. This sets them apart from other members of the large cat family such as the lion that endeavors to conquer territory near water sources to flourish.