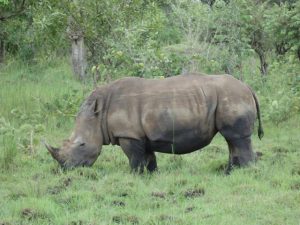 The Rhinos tread the grass in majestic grandeur, some are slow lazy steps and others are mini attempts to break into a run. They gather a mouthful of grass and chew on it gently as if to taste every straw, unaffected by tourists that lurk their sanctuary in a single file led by a ranger. You can include Rhino trekking as part of your Uganda safari to Murchison falls national park or on any of the longer Uganda tours that include gorilla trekking and chimpanzee trekking. To think that rhinos in Uganda became extinct because of the incessant poaching is appalling, yet the Ziwa Rhino Sanctuary presents to the Rhinos what the sight of each new dawn presents to us; a second chance at life.

The sanctuary sits on 70 square kilometers of land located 176 km from Kampala on the Gulu Highway in Nakasongola District toward the Murchison falls national park. Uganda was originally the home of the Black Rhino but the last one was recorded in 1982. Since the sanctuary’s establishment in 2002, the southern white rhinos have been donated by the European Union, Disney world and Kenya in 2005. This began the restoration process with the view to multiply the rhinos until they can be reintroduced into their natural habitat and thrive as they should. There are 20 rhinos so far from the 6 that were donated. 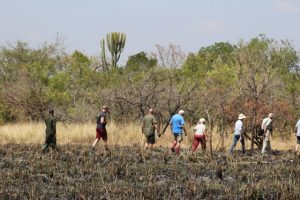 It is only in this sanctuary that one can enjoy the rhino trekking experience in Uganda. This activity will start with a briefing session at the entrance of the sanctuary in which several instructions are given among which is the need to walk in a single file or line. The rationale for this is that walking alone or in isolation from the line renders you an easy target for the rhinos in the event of an attack. It is essential that you heed to the ranger’s instructions while on this trek  to avoid any regrets.

Depending on location of the Rhinos, you may drive to the closest route nearest to where they are located to avoid walking for long distance. The ranger guide will further share more information on the behavior of Rhinos and how you ought to respond in case of anything.

Ziwa Rhino Sanctuary is not exclusively rhino oriented but is a hub of many other interesting activities such as bird watching. The sanctuary is home to over 300 bird species including the sought after Shoebill. Four birding trails have been developed by the resident bird guides at the sanctuary. Woodlands, Swamp and Savannah are some of the habitats for birds at Ziwa rhino sanctuary. The birds at the sactuary include; Grey-crowned crane, Grey Kestrel, Heuglin’s Francolin, Red-headed Bluebill, Red-headed Malimbe, Marico Sunbird, Namaqua Dove, Northern Carmine Bee-eater, Nubian Woodpecker, Pallid Harrier, Shoebill etc.

The Shoebill is one of the birds sought after by many birders in Uganda and the world over. There are high chances of sighting the Shoebill while at Ziwa Rhino sanctuary in the lugogo swamp. Other water birds sighted while on this canoe ride include; African Jacana, Black crake, Pied Kingfisher, Malachite Kingfisher, Giant Kingfisher, African open-billed stork, Great egret, Egyptian goose, African fish eagle, Goliath Heron,

The canoes are offered by the community who in turn receive payment for the service offered. This re-enforces the community conservation partnership between Ziwa Rhino sanctuary and the community. When you stay at the sanctuary you have opportunities of a night drive for the nocturnal birds.

The sanctuary has guided nature walks through the grand savanna, allowing you to enjoy the diversity of nature compressed on the Sanctuary’s 70 square kilometers acreage. You will walk with a ranger guide and receive instructions on how to behave and various information on the botany, animals and birds learning about the general ecosystem of the sanctuary. Some of the animal sightings on this nature walk include Waterbucks, Bushbucks, Kobs, Leopard, duikers etc.

Travel tips for your trip to Ziwa Rhino Sanctuary