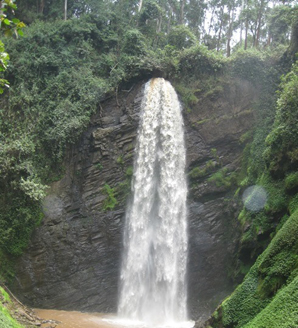 The beautiful Kisiizi falls lie on Kyabamba River a few meters from Kisiizi Hospital in Rukungiri district which borders with Kabale – in the Switzerland of Uganda found in the south western corner of Uganda. These falls are about 27 metres high dropping water into a gorge continuing the flow of the River. Visitors to the Kisiizi falls are met by mist from the falls at least 100 meters away, indicating that you are approaching the beautiful sight with a sad cultural history according to me. You can visit these falls while on your longer Uganda safaris like the gorilla safaris, wildlife safaris, birding tours or cultural experiences that we run throughout the country. Alternatively you can plan a trip just to Kisiizi falls while in the area and explore this site which is on the road less traveled.

According to the older people living in this area, these falls are believed to have contributed to the good morals of the unmarried Bakiga girls in the area and some from a far off. When a girl got pregnant out of wedlock, the father and brother would escort her to the top of these falls and release her to fall off the cliff where she would meet her death. This was done to scare off other girls from engaging in premarital sex that often lead to pregnancy hence ensuring girls stayed virgins until marriage.

The question that often lingers in many  visitors minds including myself is “where were the men who made these women pregnant?’. This reminds me of the proverbial adulteress woman in the scripture where those who accused her never mentioned the man she was committing adultery with. Well, I guess that is a question that the perpetrators of this barbaric act choose to pretend away and hence never engaged with it. It is alleged that what brought this practice to an end was an incidence where a young lady pregnant before marriage was brought to the top of the cliff to be pushed down the water falls as always. Little did they know she had a plan, when the brother and father pushed her as was the practice she held unto them and the three fell to their death. With the death of two men, the practice was stopped because they realized more girls would pull their brothers and or fathers down the same path.

There is a small forest surronding Kisiizi falls. One can take a picnic in the area and take a short forest hike for beautiful views of the Kigezi hills and valleys. One of the good views is hiking up the Kisiizi falls and watching them from the top and the surrounding area. You can take in total about 2 hours exploring this beautiful area.

Kisiizi is occupied by the Bakiga tribe of Uganda. While in this place you have an opportunity to visit a local family and learn more about their daily lives. Visit their gardens with them and learn about the farming methods. You can harvest food and get involved in preparing a local dish which you will also partake of. While at home hear stories of the local traditions and how these have changed over the years and the place of Kisiizi hospital in the area.

This entire area will keep you on your feet and itching to snap away. From the beautiful falls, the bird life, the scenery and over loaded trucks. The portraits of people in the area is another gold mine – remember to ask for their permission before snapping them.