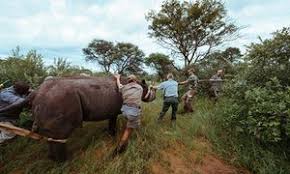 This makes Akagera national park home to all the big 5 which are Lions, Elephants, Leopards, Buffaloes and now Rhinos. It is said that Black Rhinos used to roam the plains of Akagera national park in the 1970’s but due to increased poaching, they were all killed. The last Rhino was sighted in 2007 before they officially became extinct. Akagera national park has been managed by African parks since 2010 who have done a tremendous job transforming the park and helping in growing the tourism numbers. The park management has been working continually in preparation for the Rhinos. They put together a well trained rhino tracking team together with an anti-poaching canine team. They have also secured a helicopter to do aerial surveillance at different times.

To note is that with return of cattle herders from Tanzania and Uganda, most settled in the area around Akagera national park. In fact the park was divided to provide land for these returnees after the genocide. This posed a difficult situation with community being hostile to the park because often the lions preyed on their cows. The end result was that all the lions were eventually poisoned. However in 2015, Lions were re-introduced in Akagera national park and currently it boasts of over 15 lions, though not easy to spot but with perseverance while on a game drive, your guide can advise.

If you are Kigali and would like to spend the weekend out of town, consider taking some of our tours to Akagera national park