Volcanoes National Park in Rwanda is best known for mountain gorilla trekking but the park is also rich with many other exotic activities to engage in. This park is part of the Virunga volcanoes which are shared between Uganda, Rwanda, and DR Congo. This park is an evergreen bamboo forest with grassland areas, swamp and heath in other areas.

The mountain gorillas are the prime attraction in volcanoes national park with gorilla trekking happening all year round. Because of the high altitude it is generally cold, especially early morning and the evenings, you are advised to carry a light sweater for these times. The park is located only 2 hours from Kigali in the north of Rwanda.

Mountain gorillas were the subject of the late Dian Fossey who dedicated her life to their protection and conservation. Dian Fossey carried out research on mountain gorillas at the Karisoke Research Center in Volcanoes national park, Rwanda. Her study on mountain gorillas lasted for 18 years and as a result of that study, we are able to have gorilla tourism which contributes directly to gorilla conservation. Much of her work is portrayed in the international acclaimed film “Gorillas in the Mist,” which was shot in Volcanoes National Park.

There are several gorilla families in volcanoes national park, with some habituated for gorilla tourism and others for research, whereas others are not habituated. To track gorillas, you need to purchase a gorilla permit through your tour operator with specific dates before embarking on this fulfilling bucket list experience. Each gorilla group is given a name depending on different circumstances and is lead by a silverback. When a young silverback challenges the dominant silverback, he must ‘steal’ some females from an existing group in order to form his own family.

Amahoro gorilla group – Amahoro means “peaceful” and is led by the calm Ubumwe. The group mainly resides uphill which requires you to endure a steep climb to eventually come into its territory but as always, the climb is worth it.

Hirwa gorilla group emerged from different existing gorilla families including Group 13, Susa and Sabyinyo. Munyinya the silverback after leaving Susa with 2 females,  got others along the way and eventually formed a group.

Sabyinyo gorilla group is lead by Guhonda, named after one of the volcanoes – Mt Sabyinyo. The members within this family are generally fewer but is an impressive family. This group is closest to the park headquarters, if you are weary of tracking long distances, this is the group to request if available.

Kwitonda gorilla group is led by silverback Kwitonda and the name is translated “humble one”. This gorilla group migrated from Democratic Republic of Congo and settled ‘permanently’ in Rwanda. It is moderately difficult to trek because it ranges far in the  upper slopes of Mt Muhabura.

Group 13 / Agashya gorilla group  had only 13 members during habituation hence its name. Currently it has a membership of approximately 25 members and is led by silverback Agashya which explains the name change.

Umubano gorilla group is led by silverback Charles who broke off from Amahoro gorilla group with some females to form Umubano. The name Umubano is translated ‘living together’.

Ugenda gorilla group was named after its unique behavior of roaming from place to place around the Karisimbi area, come ready to hike this volcano as you follow this gorilla group.

Susa (A) gorilla group is the largest gorilla group in the park with 41 gorillas and is the group which was studied by Dian Fossey. The group is known for having the rare twins named Byishimo and Impano. This family ranges in the high mountains making it difficult to trek, but rewards you with its size on sighting it.

Karisimbi / Susa – B gorilla group split from the original Susa (A) group and has 2 silverbacks. This group is one of the hardest to trek, residing on the upper slopes of Mt Karisimbi. It is best for seasoned hikers who enjoy the hiking experience as much as sighting the gorillas.

Titus gorilla group was named after silverback Titus which was born during the days of Dian Fossey’ research at Karisoke.

Bwenge gorilla group  was formed by silverback Bwenge after breaking away with females from other groups. Bwenge is translated ‘Wisdom’. The group occupies mainly the slopes between Karisimbi and Bisoke mountains.

The most famous inhabitants of volcanoes national park are the mountain gorillas. They have successfully placed volcanoes national park on the world map thanks to the work of Dian Fossey and the  movie “Gorilla in the Mist”. The park also hosts the beautiful, rare and endangered golden monkeys only found in the virunga region. Other animals found in the forest include, Forest elephants, buffaloes, bush pigs, giant forest hogs, duikers, spotted hyenas, bush-bucks and several primates.

Volcanoes national park is home to over 200 bird species with a number of Albertine rift endemics for bird watching enthusiasts to enjoy. Birding is the next best thing to do in this park after mountain gorilla tracking and golden monkey trekking. Some of the species to look out for include, Grauer’s rush warbler, Rwenzori batis, Rwenzori turaco, Rwenzori double –collared Sunbird, handsome francolin, strange weaver, dusky crimson-wing, collared Apalis, red-faced woodland warbler and Archer’s ground robin. 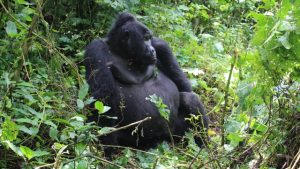 Gorilla tracking is the number one activity in the Volcanoes national park – Rwanda. The tracking happens once daily with 8 individuals visiting a gorilla group per day. The visitors are expected to arrive at the Rwanda development board (RDB) offices at 7 am where they are briefed about expectations and later distributed among the different gorilla groups. Once allocated a gorilla group and the briefing is concluded you follow your ranger guide and start your trek in search of these gentle giants. Your trek can take anything from a few minutes to 6 hours depending on the location of the group that you are tracking. Once in sight of the group, you will be able to stay in their presence for only one hour. Remember the details shared in the briefing and endeavor to follow them for your own safety and that of the gorillas, if in doubt ask your ranger guide.

What to bring for a gorilla trekking safari

Volcanoes national park is one of the 3 Important Birding Areas (IBA) in Rwanda with the rare Albertine rift endemics. Together with your bird guide, start your birding day ready with binoculars and camera to capture some of the spectacular birds in the Virunga. Your main search for the day will be the Albertine rift endemics, enjoy the great scenery as you bird. 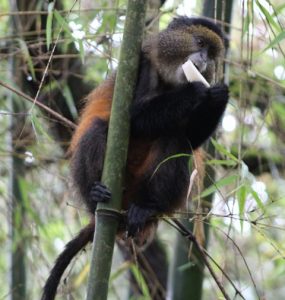 Golden monkey trekking takes place in Volcanoes national park once a day in the early morning much like gorilla trekking. You are expected to arrive at the briefing place at the pack headquarters as early as 7 am for briefing about how to behave and relate with these creatures in the wild. You will then be divided into two groups if you are many and start your trek led by the experience and jolly ranger guides. Enjoy the traditional dances from a local troupe and a hot cup of coffee before your briefing.

Volcanoes national park currently has two habituated troops that are open for visiting. The total number of individuals from both is 80 habituated for tourism. Golden monkeys live mostly in the bamboo vegetation because of their lover for bamboo shoots and unlike the mountain gorillas, they are active, which makes the trekking very engaging and interesting. You will be following after them as they hope from one area to another looking for food.

Mount Bisoke has a remarkable crater lake at the top, which makes hiking this volcano a rewarding adventure. The hike takes about 6 hours which includes the 2 hours spent descending back down.  However some of the experienced hikers take as few as 3 or less and an hour descending. Just like all activities, hikers meet at 7 am at the RDB offices where they listen to a briefing and start the hike with the assigned ranger guide. Your ranger guide is knowledgeable and ready to share the mountain adventures with you. You have access to porters who will help with your luggage at a minimal fee, you are highly encouraged to take a porter along. This is for your own freedom in enjoying the hike but also provides employment to the porters.

Mt Karisimbi is the highest of the Virunga volcanoes at 4507m above sea level and fifth highest in Africa. It is along the Rwanda and DR Congo border on the western rift valley. It derives its name from ‘amasimbi’ which means “white shell” in Kinyarwanda because of the white-capped summit a result of hail and sleet accumulating. The Karisimbi hike is strenuous but rewarding taking two days for the total journey starting through Bisoke. You have chances of sighting birds, several primates including gorillas on rare occasions and remarkable scenery.

Musanze caves are due to volcanic eruption which formed an underground space large enough for humans to enter. They are two Kilometers long with walkways and stairs that take you to the dark interior of the caves.  This activity can be done after your morning gorilla tracking.

Trekking to the Dian Fossey tomb gives you an insight in the life of Dian Fossey and gorilla conservation in the Virunga region. You will learn more about her interest in the gorillas and how over the years gorilla conservation picked on which later led to gorilla tourism. For part of the distance, you will travel in car until you reach the start of the trail head where you trek for about 1 – 2 hours. You have chances of sighting some forest animals like the elephants, buffaloes, forest hogs, and several bird species.

You arrive at Dian Fossey house where she was mysteriously murdered in 1985 and later buried next to Digit her favorite gorilla friend. The gorilla grave yard has about 20 gorillas buried here that were killed either by poachers or by natural causes. 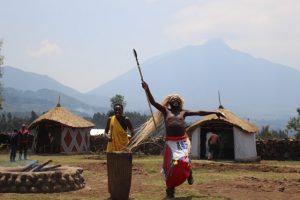 This is an initiative for local people who were formerly involved in poaching of gorillas and are now on the conservation road. Edwin Sabuhoro started the village when he worked as a warden at Volcanoes national park with a desire to transform the then notorious poachers into conservationists. Your visit to this village will continue to expound on conservation efforts and provide a livelihood for many of the community members.

Enjoy an experience of the village by taking part in the activities; join royalty by being crowned king or queen for the day, learn about the traditional lifestyles and enjoy music and dance.

Volcanoes national park is 2 hours drive from Kigali. It is 30 minutes drive from border with Uganda at Cyanika in Kisoro. You can also contract the services of Akagera Aviation to fly by helicopter.

The places to stay near volcanoes national park range from luxury, upmarket, mid range to basic establishments. Depending on your interests, most establishments are found in Kinigi, Musanze and some as far as an hour from the park headquarters. Listed below are some of the accommodations