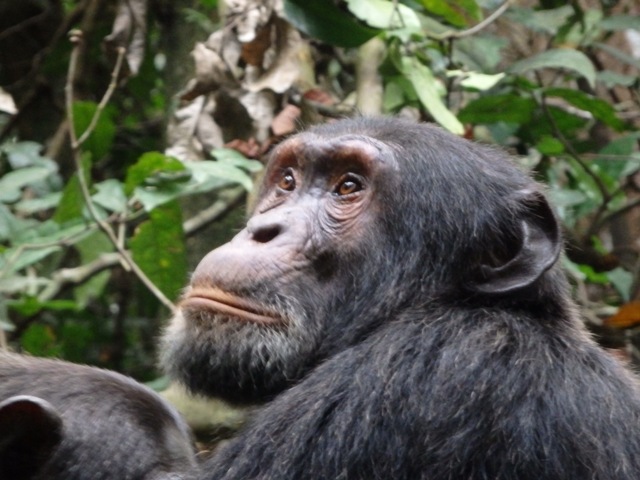 We have all probably heard of the famous Big 5 animals as identified by trophy hungers decades ago. For most people who want to come to East and Southern Africa for safari, these are certainly their main attraction. Recently we can say that while on Uganda safari you can sight not only the Big 5 but with addition of 2 great apes, we make it the Big 7 – just for just. Here is the list of our Big 7 Ugandan style.

More than half of the remaining endangered Mountain Gorilla species have their abode in the Bwindi Impenetrable forest in Uganda. The rest of the Mountain gorillas are shared between Mgahinga gorilla national park in Uganda, Volcanoes national park in Rwanda and Virunga national park in DR Congo. Some of the gorilla families are habituated for tourism which you have a privilege of visiting on a gorilla trekking safari. The family is lead by a Silverback who is responsible for protecting the family and deciding where they should feed and nest.

If you want to see chimpanzee in the wild then you want to book a Uganda safari. The country is blessed with several forests which are home to several chimpanzee populations. You can find them in Budogo forest, Kibale forest, Toro-Semliki, Kyambura gorge, Kalinzu forest where there is active. You have an opportunity to trek the chimps, there is also an opportunity for chimp habituation which is more engaging but currently only offered in Kibale forest. They are generally more active than gorillas and will keep you on the move unless you find them resting.

The biggest of African carnivores must be the number one sought after while on a Uganda safari for most visitors. The King of the Jungle likes to strut his large mane as he moves around in his territory. Ishasha sector of Queen Elizabeth national park has the famous tree climbing Lions which enjoy the climb the acacia trees and spend the day there for various reasons. Much as the lion leads the pride, surprisingly it is the lionesses that do the hunting most of the time. In Uganda you can find lions in Kidepo valley national park, Murchison falls national park and Queen Elizabeth national park, make sure to include these on your visit to Uganda.

Also referred to as the African Buffalo, the Cape Buffalo is an outstandingly sturdy species with mature bulls weighing up to 1000kgs. This coupled with their tendency to move in large herds is the fused horned bovines’ most defensive mechanism against predators. The Cape buffaloes can be found in most national parks in Uganda, where they feed on a predominantly on a herbivorous diet. They are quite a sight especially in their big herds, however be watch out for the lonely buffaloes that have often been kicked out of the herd because these can be very aggressive.

Spotted, solitary, elusive, this can be a perfect description of an African leopard! It is easy to miss this cat while on your Uganda safari because it is very elusive often shy hiding away in a tree or in thick shrubs. Besides their spotted skin making them highly adaptable to their surroundings in the wild, they are mostly active in the night. In addition to small antelopes which are their preferred food, the leopards often swim and hunt fish. They are found in all the Savannah parks in Uganda but sighting can not be guaranteed.

Identified by their long trunks, a pair of tusks, large floppy ears and a distinctly mammoth size, the African elephant is recognized as the largest land mammal with adult males weighing up to 6300kgs, the size of a small bus. In Uganda there exist the African Savanna elephant and the smaller but more destructive African forest elephant.

Elephants, like buffaloes and rhinoceroses are herbivorous. Their diet comprises grass, leaves, barks and roots which they harvest with their tusks sometimes leaving massive destructions in their wake. Their trunk is mostly used to drink water, like a big straw. Mostly moving in herds led by an older female, they can easily be spotted on game drives. You will sight elephants while on game drive in Kidepo valley national park, Murchison falls national park and Queen Elizabeth national park. Forest elephants have often been sighted in Bwindi impenetrable national park and Mgahinga gorilla national park.

Many years ago, Rhinos were roaming in Uganda’s savannah national parks but with political instability, poachers used the opportunity to kill them until the very last of them. Ziwa Rhino Sanctuary in collaboration with the Uganda Wild Authority started the Rhino sanctuary to protect and breed rhinos and hopefully re-introduce them back into the wild. Now the Sanctuary is home to 22 Southern White rhinos. The rhinos that feature a significantly large head and spot a keratin rich horn on their nose for which they are mostly endangered to poachers lie on the heavier side of the scale weighing between 1600kg to 2400kg for a fully grown adult rhinoceros. Unfortunately you can not currently find Rhinos in wild in Uganda but only at this sanctuary or the Uganda Wildlife Education Centre.