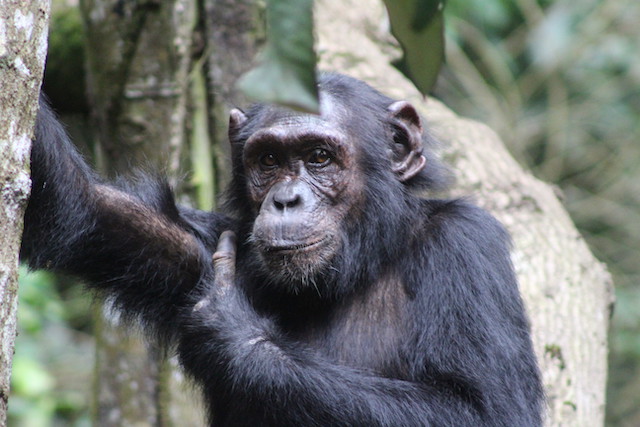 Call it the primate capital of Africa, the richest eco system in Africa or the primatologist’s dream; but one thing that rings on about Kibale National Park is its diversity and abundance of primate species. The park has acreage of 795 square kilometers most of which is forested. It is a 6 hour drive from Kampala, Uganda’s capital. If you find yourself on a safari in Uganda it would crown your experience if you visited Kibale National Park for chimpanzee trekking or a primate walk. Here are some interesting facts about the 13 primates of Kibale National Park all of which you can meet while taking a primate walk at Kibale.

Kibale has over 1000 chimpanzees with about 80 that are habituated. We, as humans share 98.7% of their DNA a fact that is manifested the chimp’s laughter, hugs and walking posture that is akin to that of humans. Chimps have been recognised as the most intelligent creature given their ability to adopt the use of tools such as leaves to act as umbrellas. Their habitat is usually rain forests and woodland savanna which explains why Kibale is has a dense population of chimps that you should not miss out on seeing.

It is also known as a spot-nosed monkey, red tailed guenon or a black-cheeked-white-nosed monkey. The choice of names is descriptive but there is more to the red-tailed monkey than you will figure out from its name. It has large cheek pouches large enough to keep as much food as a stomach would, which they use to protect their food from being stolen by other primates. Their food is mostly fruit in the absence of which they eat leaves, roots, flowers, insects and tree gum.

The name Colobus means mutilated; which is descriptive of the almost inexistent thumb on all primates that are referred to as Colobus. Born with white fur and a pin face, the Black and white Colubus Monkey grows a full black body and white beard, back and shoulders; thus the name Black and White Colubus Monkey.  Kibale is abundant in these monkeys which are quite a sight to behold.

The greater part of their bodies is covered in a short dark grey fur with a strikingly white beard and a saddle pattern on their back. L’Hoest Monkeys have been described as the most terrestrial monkeys. Like the red tailed monkeys, they too have large cheek pouches in which they store the fruits, leaves and shoots they will have gathered. You will find L’Hoest Monkeys in the thick underbrush of Kibale National Park since they prefer to live in a dense forest.

Greenish-olive and in the alternative, silver-grey will be the colours that will conform to you that it is a Vervet Monkey. The ears face, feet and tip of the tail however, are black. Kibale National Park is a perfect habitat for these monkeys because of the forest. Vervet Monkeys prefer to stay, eat and sleep in trees from which they rarely move making the Kibale Forest a perfect habitat for them. Like most primates, Vervet monkeys’ favorite pass time is grooming; removing parasites from each other’s’ fur with the dominant male Vervet monkey getting the most grooming. They are quite a spectacle and worth viewing while on a safari to Kibale National Park.

There are 20 kinds of guenon monkeys and 3 of them are found in Uganda. Among these are the Blue monkeys. The name is descriptive of their dark-blue-grey colour. They have a white throat and bear a distinct patch of white fur on the chest. They live in troops of between 4 to 12 monkeys. While on a primate walk in Kibale national Park blue monkeys will be one of primates you’re ticking off your primate checklist.

They will be leaping from tree to tree with their tails helping them balance. The appearance of a Uganda Red Colobus monkey is pretty much a rust red cap with a face that is between black and grey. They are Folivores meaning their diet is mainly leaves and in their scarcity, fruits and small invertebrates. Kibale National Park has the largest population of the Uganda Red Colubus in East Africa.

“Bush babies,” are their more common name which is descriptive of their cries and the fact that they are Africa’s smallest primates. They have large eyes that aid their night vision, an acute sense of hearing and long tails that ease their balance. Like most primates, the Demidoff Galago is quite social living and sleeping in small groups of 10. Being nocturnal primates, you are likely to get a glimpse of them on a night primate walk.

It is another small primate that can reach the length of 14 inches and a weight of 1.8 to 3.5 pounds. It prefers to live in dense tropical rainforests but can also be found in mountain forests and near rivers. A baby Potto is born white and creamy but grows into a grey, reddish or brown colour. A Potto’s eyes, like those of the Demidoff Galago, are large enough to aid its night vision. It is also an arboreal animal, spending most of its time in trees. Its hands are designed to equip it with a grip so strong it could grasp a branch for a prolonged period of time.

The Patas Monkey is also known as a military Monkey because of its red fur and soldier-like moustache. It is the fastest primate with the capacity to run at 35mph. it is in areas with little cover that you are likely to find Patas Monkeys.  In the event of danger, it is easy for the Patas monkey to use its 35mph leverage to get away when it is in the open. Unlike other monkey troops, Patas monkeys are led by females who protect the troop while the males’ purpose is to breed and from time to time send an alarm in case of pending danger.