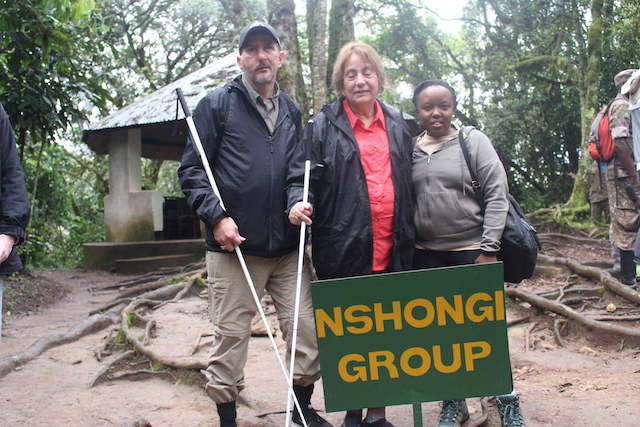 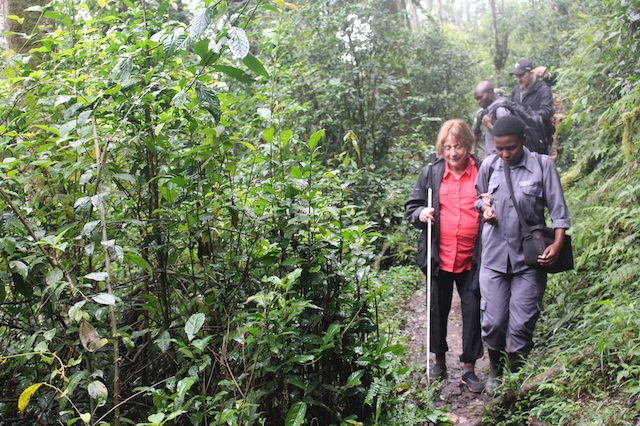 I know what you are thinking…yaaahhh, I thought the same when I first received the email. Then I thought, well anything is possible and I have nothing to lose trying this out – I am glad that I have lived to see it. Today Kagera Safaris had the privilege of fulfilling Joana and Horald dream of trekking gorillas. We had never had a request  from a blind person to track gorillas. Their first priority was to visit the gorilla orphanage in Congo where they would have a chance to interact with the gorillas closely but they decided against it because of the happenings in Congo. Next was a request to visit the Ngamba Island Chimpanzee sanctuary and the required vaccinations for them to receive were so many so this discouraged them.

Eventually they settled on gorilla trekking in Uganda’s Bwindi impenetrable national park. I asked the agent to inform them how tough this would be because of the terrain in Bwindi and the thickets one has to walk through with their condition. They were not moved and still agreed to try this. After much thought I decided to travel down to Bwindi impenetrable national park and be part of the trek just as a precaution. The beautiful Lake Mulehe safari lodge was our home as we rested and waited on the trek. The day before we visited a Batwa village to meet up with some of the Batwa that left the forest years ago when it was gazzetted as a national park. We enjoyed their singing and dancing and in turn contributed to their livelihood with shillings which can be used to take pay school fees and buy food ( they have very small plots that do not allow for sufficient food growing).

Our tour guide informed us that we needed to leave the lodge at 6.30am to make it in time for briefing where we would be allocated the gorilla groups to track and learn about the gorilla experience. We arrived and went straight to the banda where the briefing by the ranger guide takes place. All eyes were on us as many people were convinced that the couple would not make it. Many suggested that we get them a helicopter ( this is a stretcher that porters in Bwindi use to carry guests who are unable to walk to and from the gorillas) but they declined and I assured everyone that they would make it. I had already noticed how they moved freely with their cane after learning their environment at the lodge.

At first they insisted on each getting one porter even though I insisted that they need 2 each. Eventually each took 2 porters to help either side and even amidst the rains, slippery ground and bad shoes they made it to the gorillas. On our part we described the gorillas and what they were doing and this brought so much joy to them. We took photos, spent time in the forest before starting the trip back to the bandas amidst heavy rains. We are so proud of them – every person regardless of the handicap should have the opportunity to experience this. I know it is tough but instead of quickly dismissing it, why not stretch yourself, get out of the comfort zone and do that which seems impossible – remember there is always a first time to do anything. For Joana and Harold – this was their first time and a first for Uganda to host a blind couple on a gorilla trekking expedition and we are glad that Kagera Safaris had the opportunity to arrange this trip.