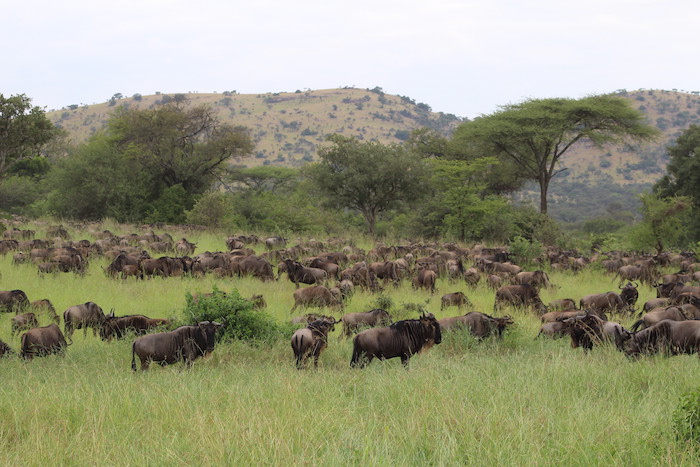 Tanzania safari is by far Africa’s visual masterpiece especially in the famous Serengeti national park. It’s a land of breathtaking natural beauty, incredible wildlife viewing, powder white beaches, charming ancient towns, and archaeological UNESCO world heritage sites. Tanzania’s Great Migration, where mighty herds of hundreds of thousands of wildebeest and zebras thunder across the Serengeti plains, is one of the most dramatic periods for a classic African safari. However, the country has much more to offer than a Big Five safari. Mount Kilimanjaro, Africa’s highest mountain, rises 5,895 meters (19,341 feet) above sea level from its lush, grassy plains, and its snow-capped peak towers over the surrounding landscape.

Furthermore, most visitors to Tanzania will cap off their unforgettable safari and mountain adventure with a serene and relaxing vacation on Zanzibar’s sugar white, palm-fringed sands and intoxicating Spice Island. Tanzania also has some of the world’s most luxurious hotels and lodges, which complement the country’s breathtaking scenery.

Going on a Tanzania safari is a extraordinary experience for you and your loved ones. Whether you are traveling alone, with family, or with a group of friends, this will undoubtedly be an enchanting experience. When planning a safari holiday to Tanzania, make sure you do your research on the Best Tanzania Safari looking at your interests vis a vis the parks or activities to indulge in. Below are some of the factors to consider as you prepare for a safari;

When is the best time to go on a Tanzania safari?

Tanzania is located on the equator and has a pleasant climate all year. While monthly temperatures vary little, the amount of precipitation received varies by season, which will affect your trip, whether you are looking for a beach vacation in Zanzibar, a trek to the summit of Kilimanjaro, or a safari in the national parks.

Tanzania is best visited during the long, dry season, which runs from June to October when most days are sunny and significant rainfall is uncommon. Another popular time to visit Tanzania is during the short dry season, which lasts from January to February and features dry weather with increasing humidity. The main rainy season which lasts from March to May is however not the best time to visit Tanzania. Daily heavy tropical downpours (mostly in the afternoon) are the norm in Tanzania. There is another rainy season in November and December, known as the short rains,’ but they are much lighter, less frequent, and less reliable than the long rains.

The best time to see the Serengeti’s Great Wildebeest Migration is probably February and March (the start of the long rains) when the wildebeest and zebra congregate and calve on the vast treeless plains. Not only can you enjoy seeing baby wildebeest, but predators are also in abundance. The great migration visits Kenya’s Masai Mara in June and July: this time you can see spectacular Grumeti River crossings with crocodiles killing their prey. Nevertheless, it is hard to predict the exact time of this event).

The long dry season (June to October) or the short dry season (November to March) are the best times to visit Zanzibar for a beach vacation. It does not rain every day during the short rains, but days can be overcast and cloudy. During the long rains, Zanzibar is best avoided.

On the other hand, the warmest and driest months are ideal for climbing Kilimanjaro (July & August, and January & February). The primary concern is safety, as the risks of climbing increase significantly when the weather is bad. Rain, mud, snow, ice, and cold can be extremely taxing on the body. If you want to combine a safari, a mountain trek, and a beach vacation into one trip, I recommend going in July or February.

Tanzania has a wide variety of wildlife, fascinating cultures, and natural scenic beauty. From the classic, sweeping savannah of the Serengeti to the flamingo-lined shores of Lake Manyara, the world wonders of Ngorongoro Crater, and Mount Kilimanjaro (Africa’s highest mountain): it’s a dream destination. It also provides bucket-list experiences such as chimp trekking in the Mahale and Gombe rainforests and game viewing in the remote wildernesses of Katavi, Ruaha, and Nyerere National Parks (Selous).

The Great annual wildebeest migration, which sees nearly two million wildebeest and zebra follow seasonal rains across the Serengeti-Mara Ecosystem each year, is without a doubt Tanzania’s most popular wildlife attraction.

Tanzania hosts the majority of the migration, with two major events taking place in the Serengeti: the mass calving season, during which nearly a quarter-million babies are born in the southern Serengeti and Ngorongoro, and the spectacular Grumeti River crossings.

Tanzania’s long tropical coastline and coral-fringed islands make for excellent safari-and-beach combinations. After breakfast, you can easily fly from a safari camp to a powder-soft beach in time for sunset cocktails. Tanzania’s top tropical islands;

Tanzania works well with other East African safari destinations such as Kenya (home of the Masai Mara), Uganda, and Rwanda (exhilarating gorilla trekking adventures). Hence, you have the option of choosing to combine your Tanzania safari with either Kenya’s Masai Mara or Uganda’s gorilla trekking.

Getting around in Tanzania

To travel to Tanzania, most tourists require a visa, which is normally valid for three months and is easily obtained at the airport or border crossing point. However, some nationalities may be required to obtain one ahead of time, so check before you travel. International planes come to Julius Nyerere International Airport (Dar Es Salaam) and Kilimanjaro International Airport (Arusha) daily: but Julius Nyerere is the country’s major airport. Domestic flights are abundant, giving access to even the most isolated resorts, particularly during the rainy season, when national parks might become inaccessible by road. Many lodges have their own local or private airstrip.

To navigate the highways and national parks by automobile, most tour operators provide a driver and guide. The Tazara Railway, which runs from Dar es Salaam to Kapiri Moshi in Zambia, is a spectacular off-the-beaten-path excursion that winds past settlements and national parks. Nevertheless, expect delays; this is for individuals who don’t mind waiting. Still, it is most likely one of the greatest ways to experience Tanzania.

Budget for a Safari to Tanzania

Tanzania is considered one of the expensive safari destinations but also the most beautiful in Africa regardless. Therefore, the budget required for a safari in Tanzania must be quite high. The higher the rates of accommodation go, the higher the prices go too.

On the other hand, most parks in Tanzania offer affordable safaris due to lower park entry fees; however, keep in mind that the majority of the money spent on a safari goes to the rental car, park fees, fuel, and lodging.

The type of accommodation you choose for your safari determines a large portion of the overall cost. There are several lodging options available:

Luxury lodges are the most expensive category of accommodation. For those who can afford it, the most expensive options will make the safari exceed all expectations, both when driving in the park and when you get into superb environments. Additionally, the rooms are tastefully decorated with the highest quality materials, and the service is impeccable.

These are the regular lodges and are roughly equivalent to three-star accommodations. Some of these lodges feature swimming pools and bars, and meals are served in the restaurant. Each room has its bathroom and air conditioning, among other amenities.

Permanent tented camps are an excellent balance between conventional lodges and camping and are sometimes even higher quality than standard lodges. They are a great way to enjoy the nature of the national parks in an environment “without walls.” These are full-service tents with beds, private bathrooms, and hot showers. Restaurants, bars, and swimming pools are available at all tented campgrounds.