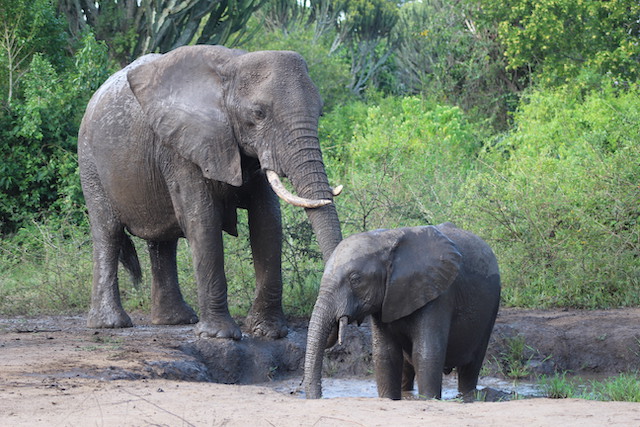 Among nature’s many gifts to Uganda is the giant African Elephant seen while on safari in Uganda. The Asian and African elephant are the only two remaining elephant species in the world and Uganda is home to the latter. There are two genetically different African subspecies i.e. the savanna elephant and forest elephant all found in Uganda.

After all the photos and videos of elephants that have crossed your path, this fact may be pretty obvious. But how large is “large”, you ask? Well, the length of the body of an adult African elephant is 3 to 4 meters and their average weight ranges from 2250kgs to 6530kgs.  This weight could be the reason behind its inability to jump. The elephant in its largeness has a brain weighing a massive 5.4kgs probably to match the weight. On a daily basis an elephant can eat up to 136kgs of food and drink up to 30-50 gallons of water a day drawing in up to 15 litres of water at once. This is possible because 16 hours of an elephant’s day are spent eating. With all this weight, the elephant is still able to run at a 40km per hour and even swim enabled by the trunk which also serves as a snorkel.

The trunk is one of the most distinct features of an elephant. It has the capability to play the vital roles like breathing, eating and acting as the upper lip. It does not stop at that. The trunk is strong enough to do heavy lifting of weights up to 700 pounds such as carrying elephant calves, yet it retains the precision to do the most delicate of things like picking straws of grass. The trunk is quite good at multi-tasking with the ability to draw in water, dig for water in the ground, spray water all over the elephant’s body when it is hot and express affection by caressing calves and other elephants. It is remarkable what a single body part of the elephant can do.

Purrs, chirps, high pitched squeaks and trumpets are some of the sounds that elephants make to communicate to each other. Some of these are too low that they may be missed by the human ear. It is a probable reason behind the assumption that elephants have a secret language. These sounds signal the daily basics such as summoning the herd to a water source or even communicate a willingness to mate.

Let’s consider the elephant’s ears; they too play a part in communication. If ever you find yourself at crossroads in telling the distinction between the African and Asian elephant, the ears are your best clue. The African elephant’s ears have a shape that is akin to that of the map of Africa. These are not only able to dispel heat when flapped, but also hear a call from another elephant standing 5 miles away!

The ability to feel emotions is one of the measures of intelligence elephants possess. They have been observed grieving over a dead member of their family and are able to show empathy by soothing each other with their trunks. They possess self-awareness which enables them to do something most animals cannot; recognizing themselves in the mirror. Nature has also gifted them with good memory that has made them thrive in the wild. Because of their memory they can remember a water source they drunk from in the past.

We hoped you enjoyed learning about Elephants. You can look forward to watching them in the wild when you visit Uganda on a wildlife safari. They have no real predators in wild. Their main predator is humans, who incessantly poach them for their tusks for ivory trade. Besides that, the real danger lies in habitat loss given the rate at which the increasing population is settling in what should be the Elephant’s habitat. In the absence of poachers and habitat loss, elephants can live for 50 to 70 years. For one that is passionate about elephants, August 12th is World Elephant Day.  And what better way to celebrate it than taking a safari to Uganda to see them in the wild.