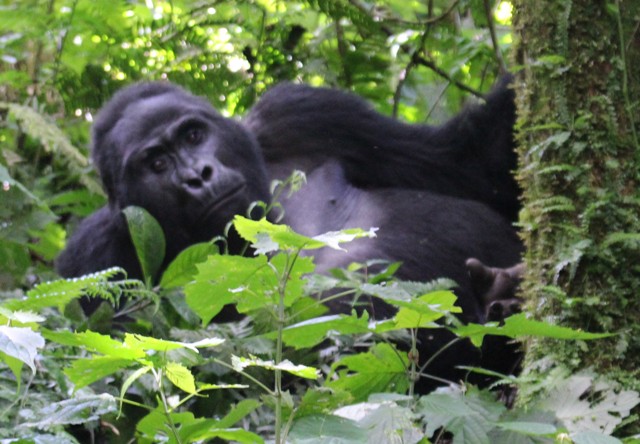 Much like humans, mountain Gorillas live in families of about 6 to 30 gorillas per familyheaded by a male Silverback. At about 13 years, the male gorilla starts to gain its silver tint and that marks the start of its adulthood. The Silverback’s duties include scheduling the troop’s trips and resting time, fathering most of the offspring and defending its members usually the females. The general composition of the family is younger male gorillas, infants, adult and younger females.

The scientific name of the Mountain Gorillas is Gorilla Beringei Beringei. However, the choice of name for the Mountain Gorillas is pretty much descriptive of the habitat that best suits their existence; mountains. They live at elevations of 1,500m – 4000m in the Virunga Ranges and midst the high tropical Bwindi forest. Here, the temperatures are cool enough; the vegetation is rich and abundant enough to sustain the Gorilla’s vegan diet. The choice of name for the Silver back is also descriptive of the silver stripe that the male Mountain Gorilla develops on its back. it would suffice to say that it is akin to the grey hair humans attain as they age.

Mountain Gorillas are not the territorial type and would not handle life at a zoo for long, do not confuse them with the low land gorillas often found in Zoos. They are always on the move depending on food availability and location. To experience them, you need to visit them and have a gorilla trek hiking through Bwindi impenetrable forest and up the slopes of the Virunga volcanoes to catch a glimpse of the Gorillas. The Silverback decides when and where to travel to move for the day.

Leaves, shoots, wild fruits and flowers are the daily menu for an adult Mountain Gorilla. Their surroundings have dense vegetation to sustain this diet which may explain why Mountain Gorillas thrive in mountainous areas and forests. The young ones on the other hand thrive on breast milk up to the age of three before commencing the vegetarian diet like the rest of the family.

IUCN classified Mountain gorillas as an Endangered Species. The political insurgencies in the DRC and Rwanda led to an influx of human settlement in the would-be habitats of the gorillas. The Gorillas were hunted and their habitats continuously invaded for charcoal burning, or agriculture. More to that, they are prone to human diseases like colds which they can easily catch only with worse gravity and could even die from a mere cold. This is why it is advisable to not trek them when you have a flu/cold to prevent the spread of such diseases.