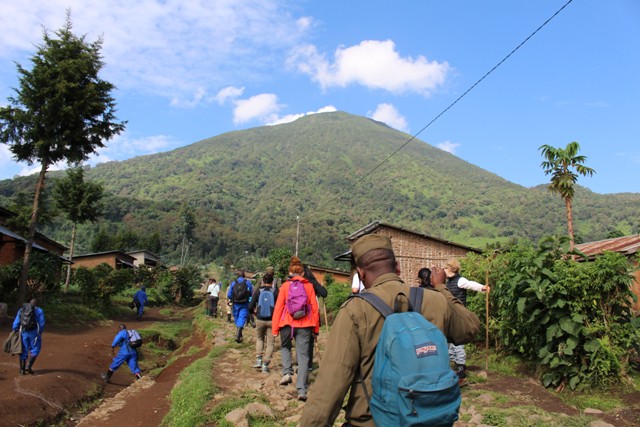 The name Virunga is derived from the Kinyarwanda word “ibirunga”, which means “volcanoes”. They are also known as the Mufumbiro ranges, which means “mountains that cook” due to the active volcanoes in D.R. Congo.

Found on the border between Rwanda and D.R.C, Karisimbi is the highest of the 8 mountains towering at 4507m high famous for its white capped summit. The name Karisimbi is a derivative of the Kinyarwanda word “amasimbi” which means “white shell”, to which the appearance of Karisimbi’s white capped summit is alluded. You need to be fit and healthy enough to hike the slippery slopes of Karisimbi. This is a 2 day’s trip with one hiking up to the peak in one day but has to overnight and start descent the next day.

At 4437m, Mt. Mikeno is the second highest peak of the Virunga ranges after Mt. Karisimbi and is entirely found in the boundary of Congo. The dormant volcano is home to many Mountain gorillas that reside in Virunga national park. “Mikeno” means “poor” and the mountain is named so because of its harsh slopes that are uninhabitable by humans. Said to be visible from the moon, Mt. Mikeno is recognized as one of the largest geographic features on earth.

Mt Muhabura is 4127m and is shared between Uganda and Rwanda. You can hike this volcano is day taking you between 6 – 8 hours uphill and downhill. “Muhabura” is a derived from the Rufumbira language which means “guide” because the locals could see it regardless of where they were acting as a guide for them on the way home. On a clear day, it offers amazing views of Lakes Edward and George, as well as the Rwenzori Mountains among other breathtaking scenes.

Mt. Bisoke found within Rwanda and Congo is considered an active volcano since its last eruption in 1957. It stands at 3711 metres high with its summit often shrouded in fog but on good days one is able to enjoy the sight of the beautiful crater lake at the top. It is a day’s hike to the summit and back often taking anything between 4 – 6 hours. The hike will take you through different vegetation types until you arrive at the top.

The summit of Mt Sabyinyo is shared between Uganda, Rwanda and DR Congo which implies that once at the summit you are in all the three countries of Uganda, Rwanda and D.R. Congo with only one visa from the country where the hiking started. Sabyinyo earns its name from the jagged appearance of its summit which is likened to “old mans teeth” according to the Rufumbira language which is similar to Kinyarwanda. At its slopes lie the Virunga National Park in D.R.C, Mgahinga Gorilla National Park in Uganda and the Volcanoes National Park in Rwanda, which are mostly home to the endangered mountain gorilla species.

Mt. Gahinga which is located inside Mgahinga Gorilla National Park rises 3474m above sea level. The word Gahinga means “pile of stones” in Kinyarwanda derived from the many stones that are washed down to peoples farms and they in turn pile them up to leave the land available to farming. The strat volcano features a swampy caldera on its peak which shared between Rwanda and Uganda.

Mt Nyiragongo found in D.R Congo is active volcano boasting a 600m deep lava lake standing at 3470m above sea level. It has erupted 34 times since 1882 with the last one occurring in 2002. It is entirely found within the borders of D.R Congo. It is on many peoples bucket list for hiking because of the beautiful volcano lava lake which has amazing views in the night. The challenging but exhilarating hike is a 2-day hike but be prepared to really hike the steep mountain arriving at your camping area on day 1 where you leave items and proceed to view the lava lake because it can be viewed in the darkness. The next day you would hike down with the help of your guide and porters.

Mt Nyamuragira standing at 3058 m above sea level, like Nyiragongo is an active volcano entirely found within the borders in D.R. Congo. Its last eruption resulted into the formation of a new 500m deep lava lake for the first time in 75 years. It stands at 3058m but is not open for tourism due to the impassable roads and security threats.