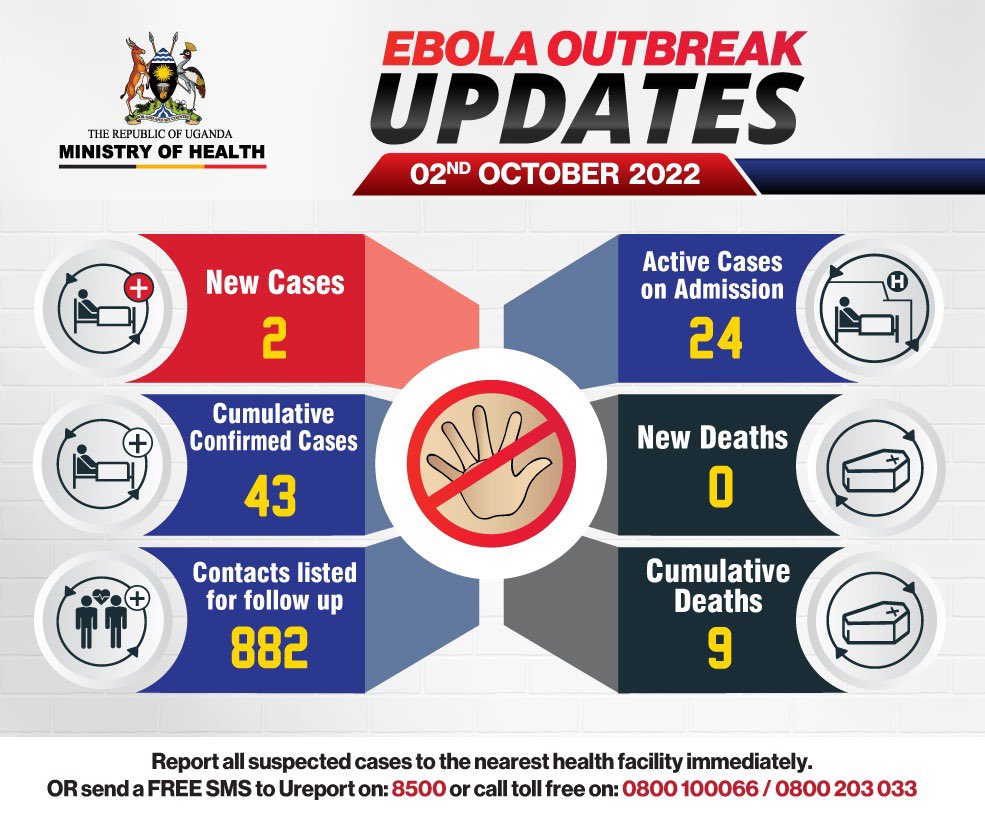 Ugandan health authorities reported an Ebola epidemic on September 20, 2022. The country has since documented 43 cumulative confirmed cases and 9 deaths. Ebola cases have been confirmed in the districts of Mubende, Kassanda, Kyegegwa, Kagadi and Bunyangabu.

Uganda is no stranger to Ebola epidemics, having seen several in the past. The last Ebola outbreak that hit the “Pearl of Africa” was roughly a decade ago in 2014 with only about 100 cases and 53 deaths recorded. Many of these outbreaks have usually been a result of a spillover from the neighboring Democratic Republic of the Congo, which has seen numerous Ebola epidemics and is now dealing with one. However, these spillovers into Uganda were mostly handled and did not result in a full-fledged Ebola outbreak in Uganda. The Ugandan health staff are fully equipped to handle this ‘outbreak’ just like in the previous instances with contact tracing, isolation of victims and burial of bodies in safe ways as not to infect others.

The Sudan ebolavirus is the strain of the Ebola virus that is driving this outbreak in Uganda. This type is less transmissible than the Zaire Ebolavirus, which produced a recent outbreak in the Democratic Republic of the Congo’s eastern region (Kivu).

Ebola virus is spread through contact with fluids of an infected person;

A person can only spread Ebola to other people after they develop signs and symptoms of Ebola.

How is Uganda handling the Ebola Outbreak?

In efforts to contain the Ebola virus in Uganda, several measures including the emphasis on locating persons who were near patients, particularly those who attended community funerals, have been put in place. Furthermore, at the epicenter of the outbreak, a 51-bed treatment facility is active in the Mubende region. President Museveni announced that two mobile laboratories will be delivered to Mubende, eliminating the need for people to go for tests and the risk of spreading the virus.

Medics have requested that the affected area be quarantined. President Museveni, on the other hand, has ruled out such limitations, stating that “Ebola is not disseminated like corona[virus]” because it is not an airborne disease. Markets, schools, and places of worship would stay open, he said, but he asked people to practice good hygiene and avoid close contact.

Still, in reaction to the outbreak, the country took quick national and sub-national actions to bolster all pillars of the response. To effectively coordinate the response, the country activated the incident management system and the National Multi-Stakeholder Task Force (NTF) chaired by the Ministry of Health and co-chaired by the WHO (World Health Organization).

Why it is Still Safe to Visit Uganda?

The Ebola virus has a much higher fatality rate than Covid 19 illness but thankfully it is not airborne like Covid19 so it is controlled easier. We just concluded the peak tourism season (June – September), when many people come to Uganda on holiday and vacation.  Most Uganda safaris include; gorilla trekking in Bwindi Impenetrable Forest National Park, wildlife safaris in Murchison Falls National Park, or Chimpanzee trekking in Kibale Forest National Park. Currently, many people planning visits to Uganda may be wondering if it is safe to visit Uganda now that an Ebola outbreak has been declared.

Uganda is certainly safe to visit and this is why. The hotspots for the virus have been identified and a national health response put in place to control further spread of the various. These areas are also outside of the Uganda safari destinations that you will be visiting.

Because of the high death rate due to Ebola, the mention of it causes terror to may but thankfully it is not easily transmitted from person to person because it is through contact. When on your safari tour, you do not have close contact with people so there will not be any transmission. Besides, the people without symptoms cannot transmit it. And you cannot be in touch with someone with symptoms because by the time they exhibit the symptoms, they are transferred to the health centre. Maintaining social distance and washing of hands with soap and water will control the spread.

So, unless it is a full-blown Ebola pandemic across the entire country, which is unlikely because of the measures put in place, Uganda is safe to visit in the meantime.

The risk of exposure to the Ebola virus from Mubende District outbreak to tourists and other visitors in Uganda beyond the outbreak area is very low. However, if you are visiting Uganda, take the following steps to avoid infection;