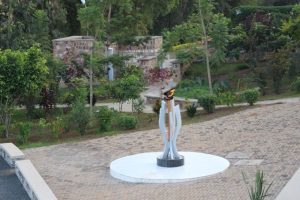 The Rwandan genocide memorial centers are spread all over the country with some more prominent than others commemorating the Rwandan genocide of 1994. It is believed that over 800,000 people were killed in a space of 100 days starting in April 1994. The centers have exhibits of remains, photographs, and personal belongings like clothing, shoes of the genocide victims. The genocide centers act as a reminder of the evil act of genocide and an appeal that it should never be repeated in Rwanda or anywhere in the world. It is also a place of solace, mourning, and link for survivors with their dead relatives and friends. People come over at different times throughout the year but more especially during the national mourning time in April of every year.

Some of the major memorials centers are highlighted below; you can request to visit any of them depending on their location and your itinerary.

The Kigali genocide memorial center is located 10 minutes’ drive from the city center in Gisozi. It is the final resting place of 250,000 Rwandans killed in the genocide. It is run by AEGIS, a UK Non Governmental Organisation committed to stop genocides from happening around the world. The center has different exhibit places with space of skulls of survivors and their personal belongings, photographs of survivors, reconciliation efforts, and genocide perpetrators. Another space has photographs and descriptions of genocides that have happened around the world showing that this indeed is not a Rwandan problem but a world problem that should never happen again. Outside the building, there is a garden and different mass graves where survivors and those who lost loved ones can come to ‘re-connect’. This can be included on your itinerary while on the Kigali city tour because of its location near the city center.

Murambi genocide memorial set on the grounds of former Murambi technical school near Murambi town is by far the most difficult memorial to visit because of the bodies and skeletons of genocide victims on display. One can almost recognize and identify a survivor if indeed they were a relative or friend. Tutsi were advised to hide in the technical school with pretext that French soldiers would protect them but alas, it was a trap. After gathering there, they had no food and were attacked by the militia. The site has several mass graves with former classrooms acting as exhibition rooms.

Nyamata genocide memorial center is a former church located 30 km south of Kigali in Bugesera. The center commemorates the 25,000 Rwanda genocide victims buried here. This is one of the more dark sites in Rwanda after Murambi genocide memorial.

It is unfortunate that many Tutsi people gathered here considering it a safe sanctuary because previously churches were seen as safe places. Little did they know that this building was a pure death trap as opposed to life. The Tutsi’s had locked themselves up in the church seeking safety but were shocked when Hutu militias forced open the doors open with hand grenades and reigned on them with machetes. You will find clothes and national ID cards of the dead victims on the church pews with blood spread all over the place. The alter cloth is still stained with blood from the massacre of the several victims. Outside the church are mass graves for your visits.

Nyanza genocide memorial located on the grounds of Kigali’s Ecole Technique Officielle in Kicukiro district – Kigali city . This often acts as the grounds for the genocide anniversary commemorations which happen yearly in April. It holds the graves of more than 10,000 genocide victims abandoned by the Belgian UN peacekeeping forces as the genocide intensified. The UN forces left these Tutsi’s in the hands of their massacres by not airlifting them to the safety they themselves were going, a sad story of bureaucracy.

More of the Genocide Memorial Sites

Bisesero genocide memorial is located 60 km from Kibuye, Rwanda with 40,000 people said to have died here. This genocide memorial site is a story of resistance of the Tutsi’s against their attackers the Hutu’s in the hills of Bisesero where they used  stones and sticks to counter the Hutu attack.

Ntarama genocide memorial it is an hour’s drive from Kigali. It is a former catholic church where 5000 people were massacred. It is much smaller than the other church genocide memorial sites because it was a small village parish. Just like the others, the Tutsi’s came here for refuge assuming that it would be safe but were shocked by attacks from the Hutu militias, who in some place accessed the building by removing bricks one by one.

Nyarubuye genocide memorial site located 140 km from Kigali is Catholic Church where 2000 Rwandan were killed. It is said that Sylvestre Gacumbitsi the then mayor of the district was involved in distributing arms and encouraging Hutu’s to use rape and later maim and kill the Tutsi’s. Unlike Ntarama and Nyamata genocide memorial sites, Nyarubuye was restored into a church and is currently used by people in the area with the memorial center adjacent to the church.