Rwanda is very committed to keeping and sharing their history with both the locals and international visitors hence the governments commitment to keeping and funding the Museums. The institute of Museums of Rwanda comprises of 6 museums in total with headquarters in Huye district located throughout the country open for visitors throughout the year. Below are the different museums in Rwanda and the areas they focus.

The Ethnographic Museum – The National Museum of Rwanda 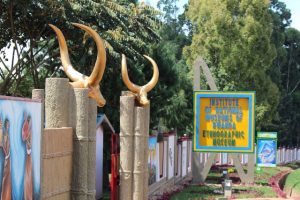 The national museum of Rwanda is located in Huye district which is en route to Nyungwe forest national park, 132 km from Kigali. It is the largest and most known of all the museums of Rwanda. The museum boasts of some of the best ethnographic and archaeological collections in East Africa of more than 10,000 artifacts. These materials include maps, photos, art objects and artifacts documenting hunting, fishing, basketry, pottery, textiles, woodcarving and metallurgy. The tour guides at the museum are knowledgeable and friendly as they take you around sharing this history.

You will get insights of not only pre-colonial times but also the development curve of Rwanda and its cultural history. This is highly recommended stopover for you on your way to Nyungwe forest to break the journey but to also give a glimpses in more of Rwanda beyond the national parks, wildlife and cities.

Rwanda museum of natural history also known as Kandt house is located in Kigali city on Nyarugenge hill.  It was the former residence of Richard Kandt a German scientist and imperialist who was the first to reside in Rwanda as all the former governors where ruling from outside Rwanda. His home was converted into the Museum of Natural History by the Rwandan government to celebrate him and his work and to symbolize the evolution of the ground, animals, and plants showing their interdependence on each other.

The Kandt house is a must visit while on your Kigali city tour, among other sites on your itinerary. Its location in the city makes it an ideal stopover for any one in Kigali regardless of how much time you have in the city.

The Kings palace museum is located in Nyanza which is 85 km from Kigali. Nyanza became the royal capital of the Kingdom under the reign of King Yuhi V Musinga in 1899. Over the years with development and abolition of the Kingdom, the palaces suffered destruction but have been renovated. The royal palace acted as the place where decisions on running the kingdom were made and had the best artistic impressions of building architecture of the time. Today on your visit to the palace, you will enjoy the beauty and learn more about the lifestyle of the ruling class and Rwandan culture plus the history and culture of Rwandan people. The palace has also been restored and is open for visitors.

Rwesero arts museum is located in Nyanza district which is about 85 km from Kigali. The museum was built initially as residence for King Mutara III Rudahingwa but unfortunately he passed on before he could reside there. The museum displays contemporary artwork showing how it derives its inspiration from the Rwandan traditional and national history. Its location on Rwesero hill gives you a panoramic view of Nyanza and its environs. It is strategically located en route to Nyungwe forest national park from Kigali so you can consider stopping over for rich Rwandan history and buy yourself some artwork.

The presidential palace museum was recently added on the list of museums of Rwanda. It is located about 2 km from Kigali international airport and served as home to the former presidents of Rwanda, Juvenal Habyarimana, and his predecessor Pasteur Bizimungu during their reign as Rwandan presidents. It houses the debris of the presidential jet which was shot down on 6th April 1994, this later sparked off the Rwandan genocide. You can walk through the different rooms and ‘secret’ passage ways offering you a small glimpse of the statehouse. The visit to this museum gives you a glimpse in the life of the two presidents with portraits of the former presidents and the gifts received from different presidents or nations.

The Rwandan museum of environment is located next to Lake Kivu in Karongi district. This is the perfect location because Lake Kivu is one of Rwanda’s major environmental assets. The museum acts as an educational aid on how to co-exist and utilize natural resources in a sustainable way. Its mandate is to educate the public on how to utilize the environment without destroying it and therefore benefit from it for generations. A visit to this museum will give you a glimpse of climate change in relation to Rwanda and how the people and government are responding to it.