On 11th May 2013 Busoga Tourism initiative and Uganda Tourism Board opened up Kagulu rock officially as a tourist and cultural site in Uganda. This was following up on the promise by Uganda tourism board to continue diversifying the tourist products on the Uganda market;  Uganda Gorilla trekking, wildlife safaris, birding safaris, adventure tours and other cultural sites and experiences already in Uganda. 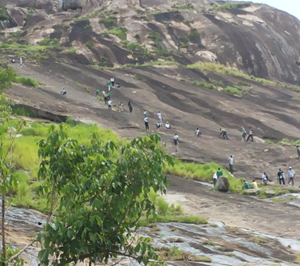 Kagulu Rock is located in Buyende district which is 30 Km off Kamuli town. It is about 4 hours drive from Kampala the capital of Uganda. The hill rises at approximately 3,500 ft above sea level with great 360 degree views around it. Since 2003, many people especially foreigners have been enjoying rock climbing at Kagulu Hill but with no proper development and limited facilities to use. This year Busoga Tourism Initiative decided to interest many other tourism stakeholders and domestic tourists to start rock climbing as an alternative experience from the White water rafting, quad biking, horse riding, boat trips on  river int he nearby Jinja.

According to Busoga Tourism Initiative, Kagulu Hill is a mystical wonder, which marks the first settlement area for Basoga people who migrated from Bunyoro led by the then Prince Mukama. This is believed to his settlement and later his Kingdom seat due to its high altitude that allowed him have great views of the surrounding. Although the cultural value of Kagulu extends to cover a wide area, the remaining and visible landmark is the Kagulu hill. The hill sits in between two roads that divide at the foothill to lead to Gwaya and Iyingo areas.

Kagulu hill is also among a handful of hills in Uganda that have been adapted for tourism with continued rock climbing opportunities. One side of the hill has several steps all the way to the top for someone not keen on going the rough way but do not be fooled taking the many steps is equally strenuous. At the top is a spectacular 360 view with an expanse of green vegetation and views of Lake Kyoga found in northern Uganda.

If you are keen on an adventure, you can add an experience of Kagulu rock climbing on your Uganda safari. Kagera Safaris attended this occasion and we highly recommend this experience for anyone interested in adventure, scenery and photographic moments with the main activity being rock climbing.