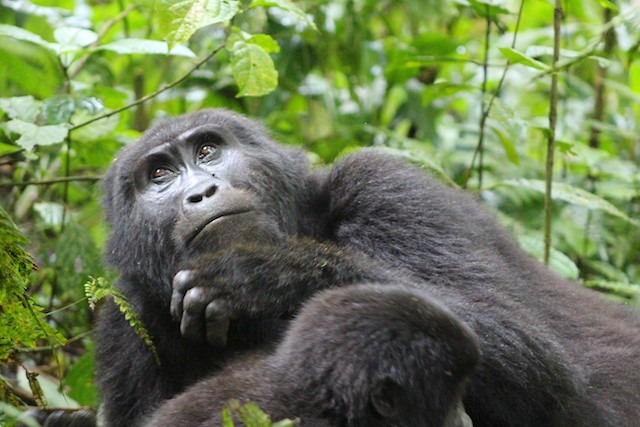 Of the entire world’s gorilla population, Uganda is home to about 600 mountain gorillas. Bwindi Impenetrable national park holds most of this population and has over the years seen the gorillas through the habituation process to ease trekkers’ encounters with the gorillas. There are 19 habituated families to look out for when on a gorilla safari in Bwindi. Here is a sneak peek at some of the families’ history, composition and location.

The habituation of the Mubare family started in October 1991 making it the first gorilla family to be habituated in Uganda. The then dominant silverback Ruhondeza died and his grave can be visited while gorilla trekking in Bwindi. The family’s name is derived from the nearby Mubare hills. It is presently comprised of 6 members with 1 silverback making it the smallest gorilla family in Bwindi.

This family is comprised of 17 members with 1 silverback. It can be found at the Buhoma region of Bwindi although it is quite nomadic. When its habituation started in 1997, the chief silverback was Mugurusi. His successors were Rwansigazi and Mwirima who split the family in two with Rwansigazi retaining the members that form the present day Habiyanja gorilla family. Mwirima went on to form another family called Rushegura.

The Rushegura gorilla family was formed under the leadership of Mwirima a silverback originally from the Habiyanja family. The family’s name is a derivative of the place at which the two brothers Rwansigazi and Mwirima split up. It boasts of 20 members and 1 silverback.

With 4 silverbacks in one family, the Bitukura Gorilla family tends to attract so many trekkers. Regardless of the fact that he comes second in rank to the eldest silverback, Ndahura is the family’s lead silverback. Karamuzi, Rukumu and Rukara are the three other silverbacks in the family. The rest of the members are 2 black backs, 3 adult females, 2 juveniles and one infant called Kadogo. The name Bitukura was derived from the river where the family was first seen.

Originally group known as Kyaguliro before the split after the death of the leading silverback Rukina. The unfortunate death of Rukina inaugurated Mukiza as the new leader of the family. He was however not strong enough to put up a good fight when Rukare raided his family leading to the split in the Kyaguliro family. Kyaguliro A is now led by Mukiza and known by the same name. The habitation of this family started in 1995 and the gorillas were not exposed to any trekkers as they were used by Max Planck Institute of Evolutionary Anthropology for research to better understand the greater mountain gorilla population.

Kyaguliro B broke away from Kyakuliro A after the death of the dominant silverback Rukina and it remained with the name Kyaguliro. Rukare put a fight to challenge Mukiza who had taken over from Rukina and managed to separate the family and leave with some members. Both groups were mainly used by researchers but are currently open to visitors. It is located in the Ruhija sector of Bwindi impenetrable national park.

July 2010 opened the Nshongi gorilla family to trekkers. The family name is derived from a nearby stream called “Omushongi Gwoboki” literally translated to mean stream of honey.  With 25 members led by 2 silverbacks, Nshongi is the largest gorilla family in Bwindi. The lead silverback of this family is Nshongi. The lot can be found in Nshongi-Rushaga south of Bwindi.

December 2012 opened the Bweza gorilla family to trekkers. Originally, this family was part of Nshongi the largest gorilla family under the leadership of Mishaya. Bweza the current dominant silverback consequently separated from the Mishaya gorilla family to form his own. The family is now made up of 9 members including 1 silverback and can be found in the Rushaga sector of Bwindi.

The name Kahungye is derived from the family’s resting place; a hill situated south of the park in Rushaga. Since October 2011 when the family was open to visitors. The family was in the past comprised of about 27 members but after a split, it is currently made up of about 13 members. Their lead silverback is called Gwigi.

This family broke away from the Kahungye family in 2012 under the leadership of Busingye the family’s present day dominant silverback. At the time of breaking away, Busingye took with him 7 members but has since increased the number to 9 because of his latest conquests. The family can be found in the Rushaga region of Bwindi.

Led by a Silverback known as Bahati, the Bushaho gorilla family boasts of 9 members. The number of members is bound to increase depending on the aggressiveness of the silverback, its ability to raid new members as well as sire more offspring to grow the lot. It is found in the southern part of Bwindi in Nkuringo. The family was habituated with the Bukingi gorilla family and is now open to trekkers that are out to encounter gorillas in Uganda.

The name Bukingi was derived from the family’s home ranges. During the habituation process, the Bukingi Gorilla family was visited daily by vets that worked with the rangers in monitoring the gorillas to eliminate any traces of sickness and saving the lives of the gorillas where the need arose. The Bukingi gorilla family under the leadership of Bukingi the silverback can now be found in the Rushaga region of Bwindi.

“Nkuringo” was the name of the family’s pioneer lead silverback and the family was named after him. The family’s habituation ended in 2004 and Safari is the current dominant silverback leading a family of 18 members including 2 silverbacks. The family is located in Nkuringo which is perhaps the most challenging gorilla tracking trail. After the hustle is done, the sight of this family can be quite satisfying.

Found in Nshongi-Rushaga, the Mishaya Gorilla family is made up of 12 members and 1 silverback. Mishaya was the lead silverback and the reason behind the family name. The family shares a history with the Nshongi family from which it defected in 2010 under the leadership of Mishaya. Mwine has since the death of Mishaya in 2014 been the dominant silverback.

The Katwe gorilla group has been added to gorilla families in the Buhoma sector in 2018. This was a welcome increasing the number of gorilla groups in Buhoma from 3 to 4 groups hence increase the available number of permits for tracking. This group took about 3 years to habituate the family. Currently the number is 10 with 1 silverback, 3 black-backs, 4 adult females and 2 babies.

Kutu gorilla family is located in the Rushaga Sector of Bwindi impenetrable national park. It currently has 8 members with the 1 dominant silverback. This group was previously available for gorilla habituation which only happens in the Rushaga sector. After several years of being visited, it was eventually ready to have guests visit it while on a gorilla trekking experience.

Christmas gorilla family is located in Nkuringo sector of Bwindi impenetrable national park. It is ready for tracking for any guests visiting this sector. It derives its name from the dominant silverback named Christmas. The group currently has 9 members with only 1 silverback. However for some reason trekkers are only able to see 6 members when they visit this family.

Unlike the other gorilla families, the Nyakagezi family is the only habituated family found in Mgahinga Gorilla National Park. Nyakagezi is currently made of 9 members including 3 silverbacks under the leadership of Mark the dominant silverback.

NB: The number of gorillas per family keeps changing due to many reasons, the numbers could increase on decrease. Please note that at the time this article was written, these were the confirmed numbers.