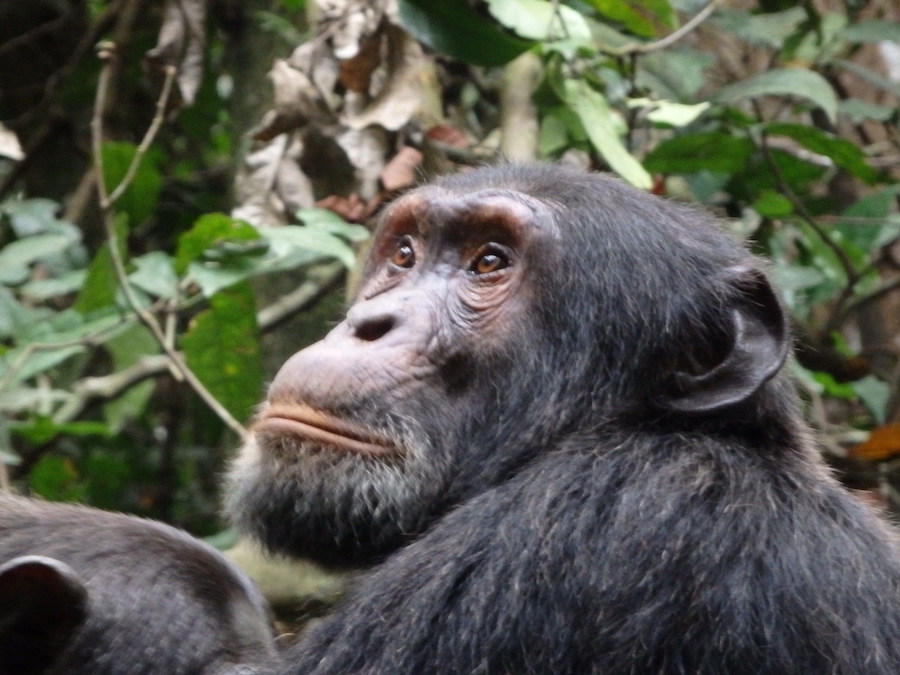 Chimpanzee trekking in Tanzania  is an experience away from the usual wildlife safaris in the Serengeti, Ngorongoro, Tarangire and Lake Manyara national park which make the northern circuit of the numerous in Tanzania. On a typical Tanzania safari, you normally expect to encounter the big five, a range of predators, and grazers in the various protected areas. However, meeting man’s closest relatives in their natural habitat is as astounding as can be. The experience finds you strolling through the majestic forest of Mahale Mountains National Park in search of these apes. Spending time in their company is even more gratifying.

Through the fig, mahogany, silk, and nutmeg trees, you look around for the source of the noise you are hearing. Soon enough, you spot a colobus monkey looking for fruit or a giant forest squirrel. But, your heart still pounds with excitement because you can’t wait to spot your close relatives. After a few hours of trekking, you finally find them. A group of habituated chimpanzees, all glaring with curiosity. An hour spent in the company of chimps is worth every penny. Watching them climb the enormous forest trees in search of leaves and fruits is so amazing. Embrace the varying echoing chimp sounds as they communicate with each other. Chimp groups in Mahale are habituated, meaning they are unmindful of the presence of human beings. They will carry on with their daily routine without a care in the world. Within a safe distance, watch them feed, play and even fight.

Mahale Mountains National Park is a beautiful National Park located on the eastern shore of Lake Tanganyika. It is found in Uvinza District of Kigoma Region, Tanzania. Named after the Mahale Mountains that lie within its borders, the Park covers an area of about 1,650 sq. km. It stands at an elevation of 2400m above sea level. Mahale encompasses jungle-clad mountains with mahogany, nutmeg, silk, fig trees, and verdant vines at the base. And above, britlewood, pines, rush foil, and bamboo shrubbery. The Park also includes Lake Tanganyika, the world’s second-deepest lake. It is characterized by white sandy beaches and fascinating turquoise freshwaters.

Besides chimpanzees, the Park hosts a variety of red-tailed monkeys, red colobus monkeys, and blue monkeys. Many vervet monkeys and yellow baboons are also present. Wild animals in the Park include wild dogs, roan antelopes, blue duikers, porcupines, mongooses, and squirrels. On rare occasions, a range of lions, leopards, buffaloes, elephants, and giraffes can also be seen. On top of that, the Park has an impressive bird count.

Known for its uniqueness, Mahale Mountains National Park has the largest population of Eastern chimpanzees. And given its size and remoteness, the chimps thrive there. It is also the only destination in Tanzania where chimpanzees co-exist with lions. More so, Mahale is one of the few parks in the continent that must be experienced on foot. There is no single road or any other infrastructure within the Park boundaries. The only way in and out of the Park is via boat on Lake Tanganyika. Also, Mahale National Park is one of only two protected areas for chimpanzees in Tanzania. The other is Gombe Stream National Park

Gombe became famous after Jane Goodall launched her behavioral research on chimpanzee groups in 1960. The Park also hosts olive baboons, Anubis baboons, red colobus monkeys, red-tailed monkeys, and blue monkeys. An array of vervet monkeys and beachcombers are also present in the Park. Gombe also flourishes with more than 200 bird species, many bushpigs, and various snake species. On rare occasions, African leopards and hippos can also be sighted in the Park.

Marveling at the chimpanzees swing between tree branches up in the tree canopies is breathtaking. Watch the mother chimps collect insects and termites from trees to feed their babies. Watch them groom each other and play. Most of these individuals are habituated. Hence, human beings have the opportunity to have closer encounters with them.

Chimpanzee trekking in Tanzania can be done throughout the year. But it is best enjoyed during the dry season between May to October. During this time, the terrain in the forests is accessible. the vegetation is short. The trekking trails are also less muddy and slippery. Also, chimps are closer to the lower slopes of the mountains, thus easier to find.

Rules and Regulations for Chimpanzee Trekking in Tanzania

What you need for Chimpanzee Trekking in Tanzania