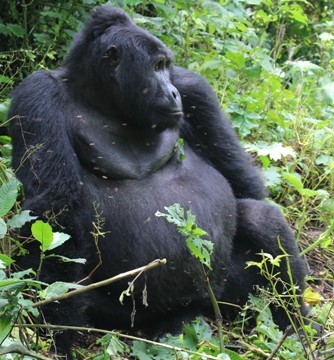 With 11 habituated gorilla families in the Volcanoes National Park alone, Gorilla trekking is a must-do activity while on a safari in Rwanda. The world’s dwindling and endangered gorilla population is found in only three countries in the world; the Democratic Republic of Congo, Uganda and Rwanda. Almost all the gorilla population in Rwanda can be found in the Volcanoes National Park. The families to visit include Amahoro, Ugenda, Umubano, Karisimbi, Sabinyo, Susa and Hirwa among others.

The trek begins with a briefing at the park’s headquarters and is followed by a hike up the bamboo terrain of the mountain. There are guides for each group of trekkers to lead you to the habitats of the gorilla families and the maximum number per group of trekkers is 8 people only. Once you have sighted a family of gorillas, you can only spend an hour with them in which you can take photos, make videos and see these grand primates.

Golden monkeys are an endangered primate species and a bucket list activity when on a safari in the Volcanoes National Park. They have been habituated to better the experience for the tourists. Most of the golden monkeys can be found in the bamboo forest at the foothills of the Virunga Volcanoes.  The golden monkey tracking experience comes with guide to ease your way through the tracking, share the Park’s history, facts about the primates and lead you to the golden monkey hotspots.

If you love to hike and find yourself at the Volcanoes National Park, you will have two hiking options to choose from; the Day and Overnight Hike. The Day Hike leads you to Mount Bisoke one of the volcanoes in the Virunga ranges.  It stands at 37,000meters with a crater lake at the top.

The Overnight Hike is along Mount Karisimbi the second highest volcanic peak in the Virunga Ranges. Along this trail are diverse vegetation zones from bamboo, Afro-Montane to savannah. This hike is also known to be one of the most challenging hikes in the Volcanoes National with a snow-capped peak especially in the dry season of June, July and August.

These age-old caves were once used to store food supplies for the kings of Rwanda in times of war. Today, they are quite a scene to behold when visiting the Volcanoes National Park. The cave ceilings are studded with lots of bats whose eyes sparkle when you shine your flashlight to the ceiling. As you move towards the end of the cave and into the daylight, all you will have heard in the midst of the cave’s silence are your footsteps and the thick dew drops hit the cave’s floor. A walk through these caves is literally a walk down memory lane.

Iby’Iwacu Village now known as Gorilla Guardians Village is close to the park making it a perfect sendoff place to visit as you leave Volcanoes National Park. The activities here can be done whether you opt to stay a few hours or overnight. Are you searching for a new menu? Try preparing or even eating the traditional meals and drinks such as banana juice or brew banana beer. For the botanist or medical personnel, try the local herbal medicine grown and brewed fresh from the garden.  After your curiosity has been quenched, unwind to the traditional music, dance and folklore by the local people and dance troops.